WINTON – In recognition of suicide prevention worldwide, Hertford County E911 distributed yellow ribbons to all local law enforcement agencies as well as EMS personnel in Hertford County. These fellow first responders assisted Hertford County E911 in their efforts of spreading awareness to this top ten mental health issue as they wore the ribbons attached to their uniforms during the whole week of Sept 6-10. 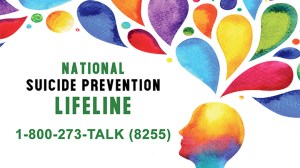 On Sept. 10, which is recognized annually as World Suicide Prevention Day, people all across the nation share one common goal and focus on a commitment to the prevention of suicide and making sure the negative stigma attached to it is one day eliminated.

Thanks in part to the many donations of free resources and information from local, state and nationally based organizations and nonprofits, Hertford County E911 was able to create a total of 200 bags which were passed out in the community at Dollar Tree in Ahoskie and Dollar General in Murfreesboro. Each bag was filled with viable information and knowledge on the topic of suicide prevention. Donations were collected at each site for a nonprofit named Real Crisis serving out of Greenville, which dedicates its efforts to providing assessments, emotional support and crisis assistance through the National Suicide Hotline.

To cap off World Prevention Day, Hertford County E911 hosted a candle light vigil which honored the memory of those who have committed suicide, survivors, and those impacted by suicide. It also increased awareness relative to mental wellness, suicide and suicide prevention.

Going forward, Hertford County E911 looks to continue building off the success of this amazing event by making a difference not only behind the headset but out in the community by organizing and participating in events.