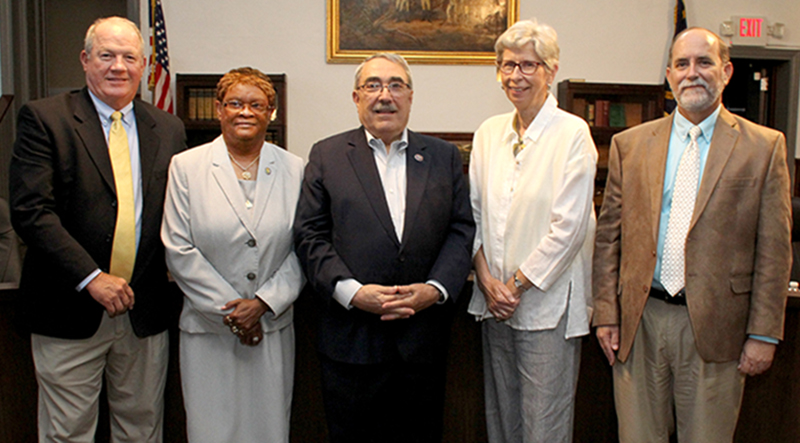 GATESVILLE – The broad scope of federal government is perhaps too complex for average Americans to fully understand.

From a simplistic standpoint, American citizens vote to elect their leaders to represent their values and beliefs. But those individual wishes are all too often muddied during the political conflict between the two major parties.

U.S. Congressman G.K. Butterfield (D-NC 01) was invited to address Gates County citizens last week during a special called meeting of the county’s Board of Commissioners. Butterfield, who has been in office since 2004, spoke of the different political landscape in the nation’s capital and the changes that occur during election cycles that determine which party controls the House and Senate chambers.

“It really matters who controls each branch of government,” he said. “Right now, the Democratic Party has the majority votes in each chamber, meaning they determine the leadership. But our goal remains to serve the American people, and that can be difficult due to blame on both sides of the political aisle. But I can assure you that there is a critical mass of members of Congress who are in the center. I believe we can get things done.”

One “thing” is the President Joe Biden’s infrastructure bill.

Just a few weeks ago, Butterfield said a $1.1 trillion infrastructure bill passed the U.S. Senate with a bi-partisan vote. That legislation – which includes $110 billion for transportation projects; $66 billion for rail; $36 billion for federal/state partnership grants; and $65 billion for broadband – is now being debated in the U.S. House.

“I know everyone sitting in this courtroom understands the critical importance of broadband,” he stressed. “We will vote on this infrastructure package no later than 12 midnight on Sept. 27. We’re looking for bi-partisan approval.”

The Congressman added that while the infrastructure legislation appears on its way to passage, there’s another, more controversial, bill waiting in the wings.

“The President’s Build Back Better plan is $3.5 trillion…that’s a whole lot of money, but when you look at the spending breakdown, I see money that’s much needed in rural America,” Butterfield stated.

“We are now putting the pieces together to try to have a comprehensive package that we will discuss, debate, and hopefully vote upon before the end of the month,” Butterfield said. “Right now there’s a lot of debate over the price of this proposed plan. I foresee some sort of compromise to get this done.”

The Congressman also addressed the government’s growing deficit, now standing at a whopping $28.5 trillion. Of that amount, $2.5 trillion has been added this year alone.

“In its simplest form, our government spends about $4.5 trillion every year, but two-thirds of that is entitlement spending…Medicare, Medicaid, Social Security, Veterans benefits,” he pointed out. “We don’t vote on entitlement spending. The other one third is discretionary spending, of which one-half of that goes to the military. What’s left on the table is about $700 billion. That’s the amount we fight over every year…we fight for education spending, healthcare, housing, etc.”

The bottom line, however, is that the government spends more than it receives. That results in a deficit.

However, even though that level of borrowing money keeps increasing, Butterfield maintained that it has yet to reach a “serious level.”

“It’s not time to raise a red flag and surrender,” he said. “You measure the debt in proportion to the national economy. We haven’t reached the level where we need to shut down and stop spending.”

The Congressman pointed out that the tax cut bill of 2017 removed $1.5 trillion from money that could have been used for appropriations, and thusly saved the nation from having to borrow even more for operating expenses.

“That tax cut was tilted towards the high end [wage earners] and not the low end. I did not vote for that tax cut,” he stressed.

Butterfield then posed this question: “Where do we go from here?”

“I need sensible, rational suggestions from you to take back to Washington where we can talk about our issues,” he said. “I don’t have all the answers. I need to hear from you and from all those in my 15-county district.”

One item that Butterfield promised to push for is infrastructure improvement in Gates County and his entire district.

“That will happen if we can pass, intact, the $1.1 trillion for infrastructure,” he said. “Improvements in that regard will happen here.”

He also promised to stand with that “mass in the middle” and work to, “put aside the differences between the political parties that now slows down the legislative process and worked towards an effort of compromise. That effort will reveal itself in the next few weeks where I hope we find bi-partisan solutions.”

Butterfield’s visit also included a closed-door meeting with the county commissioners. Dr. Althea Riddick, chair of that board, said she was not at liberty at the present moment to discuss what transpired in that private session.

“I will say that particular meeting was productive,” Riddick stated.

She thanked Butterfield for explaining how things work in Congress and his willingness to solicit suggestions from Gates County citizens on how things can be made better for all.

“Times have changed; we’re moving Gates County from its past towards a bright future and we need to include our federal leaders in these discussions in order for them to understand who we are and what are our needs,” Riddick remarked. “These real people and we have real issues to address.

“We’re thankful and grateful that he took the time to visit, and we need to continue to engage our federal and state leaders to build a network where we exchange ideas on how to move Gates County forward. This board is engaging at all levels and our citizens are included in that engagement,” Riddick concluded.