AHOSKIE – Two big plays, one on each side of the ball, over a span of 13 seconds loomed large in Hertford County’s 33-21 win over Currituck County here Thursday night in the Northeastern Coastal Conference opener for both teams.

Clinging to a 26-14 lead with under six minutes remaining and with the visiting Knights threatening at the HCHS 10 yardline, junior cornerback Israel Powell made a leaping interception in his endzone to deny Currituck. One snap later, senior running back Tyree Coatney found a crease in the right side of the line, hit the hole and turned on the jets – racing 80 yards for what proved to be the game-sealing touchdown with 5:31 remaining. 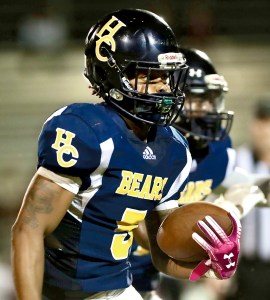 Hertford County’s Tyree Coatney rushed for a game-high 183 yards, including an 80-yard touchdown scamper in the fourth quarter that sealed a 33-21 win on Thursday night by the Bears over Currituck County. Photo by William Anthony

Coatney was the game’s leading rusher with 183 yards on 15 carries as the Bears improved to 3-1 overall and 1-0 in league play.

Currituck (1-3; 0-1) got to within 33-21 with 3:55 left after marching 80 yards in 11 plays capped by Makegan Piorkowski’s 17-yard scoring strike to Ernest Harris. The Knights then recovered the ensuing onside kick and drove to the Bears 24 yardline where they lost possession on downs and HCHS ran out the clock.

Scoring on their first three possession of the game, Hertford County built an 18-0 halftime lead.

Sophomore quarterback Keveon Rodgers directed a seven play, 80-yard drive on the Bears first possession. Rodgers (who finished with 202 yards through the air on an 11-of-16 effort) capped that drive with a 45-yard TD pass to a wide open Bryant Williams at the 4:24 mark of the first quarter.

Rodgers also had a hand in Hertford County’s pair of second quarter touchdowns. He ran for one score (a five-yard blast up the middle to cap a nine play, 73-yard drive) and hooked up with senior wide receiver Elijah Winley on a 78-yard scoring bomb.

In addition to his passing effort, Rodgers also added 71 rushing yards, which helped the Bears finish with 281 yards on the ground.

Meanwhile, the HCHS defense was able to keep Currituck out of the endzone over the opening 24 minutes despite the Knights having a trio of golden scoring opportunities.

After driving to the Bears 11 yardline on the game’s opening possession, Currituck misfired on a 26-yard field goal.

Their second series ended at the HCHS 28 where the Knights surrendered possession on downs after Powell batted away a fourth down pass from Piorkowski to Harris.

Currituck’s final possession of the first half reached the HCHS 13 yardline. On fourth down, Winley – from his free safety position – picked off Piorkowski’s pass intended for Damien Hicks at the goal line.

The Knights caught the Bears by surprise with a successful onsides kick to start the second half. That set up a six play, 45-yard drive capped by Piorkowski’s 33-yard scoring pass to Hicks. The PAT kick closed Currituck’s deficit to 18-7 at the 7:00 mark of the third period.

The Bears answered later in the quarter, driving 73 yards in nine plays capped by a 14-yard TD run by Rodgers. A two-point conversion pass from Williams to Powell extended the HCHS lead to 26-7 with 43 second left in the third quarter.

Currituck closed to within 26-14 at the 9:53 mark of the fourth quarter where Piorkowski connected with Harris on a six-yard scoring pass.

Piorkowski was Currituck’s top offensive weapon, passing for 242 yards (20-of-44 through the air) while adding 37 rushing yards.

The Bears will be back at home next week (Friday, Sept. 24) when they host Pasquotank in a 7 p.m. conference game.