MURFREESBORO – The life and legacy of one of best basketball coaches of all time will be celebrated here Saturday, Sept. 18.

Bob Burke, whose 419 career wins at Chowan University may never be equaled, will be remembered during a 10:30 a.m. event inside the Hawks Athletic Center. The public is invited.

Burke – who also coached at the University of Hawaii as well as serving as an NBA scout – passed away on April 6, 2020 at the age of 74. 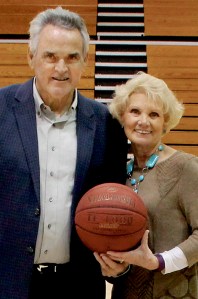 Saturday’s event at Chowan will feature remarks from several of his former players…Nate McMillan (Class of 1986) who is now the head coach of the NBA’s Atlanta Hawks; Bobby Ray Smith (1987), a Facility Director with the New York State Division of Juvenile Justice; Fred Vinson (1991), currently an assistant coach with the NBA’s New Orleans Pelicans; and Shawn Hubers (2002), Principal of Cherryville High School.

Others scheduled to share stories about Coach Burke include John Hindelong, a lifelong friend who retired as a Health Care Analyst on Wall Street, and John Thompson, head basketball coach at North Carolina Wesleyan College.

The Burke family – wife, Jane; son, Rob; and daughter, Ashlyn – will share words of remembrance. Rob Burke was hired earlier this year as the men’s basketball coach at Chowan, where he once played for his father.

Bob Burke, a native of New York, NY, played college hoops at Campbell University. He coached at the high school and college levels, coming to Murfreesboro and Chowan in 1980 where he built one of the most successful programs in the nation.

Burke’s career at Chowan spanned 22 years. His teams were always a force to be reckoned with, to include 12 consecutive 20-win seasons. He took what were then known as the Chowan Braves to three JUCO Sweet 16s, including one Final Four. In 2000 he was inducted into the Chowan University Hall of Fame.

When he left Chowan for Hawaii, Burke was the third winningest active basketball coach in North Carolina history behind only Mike Krzyzewski (Duke) and Jerry Steele (High Point).