AHOSKIE – In a small community, people can be connected in any number of ways.

She grew up in Charlotte, but has roots in both Murfreesboro and Ahoskie, where she was born. Medical work was something she was familiar with at an early age, with her mother working as a pharmacist and her grandmother working as a receptionist at a local doctor’s office. 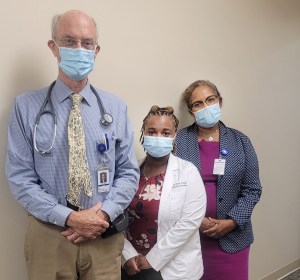 “I actually come back here pretty frequently,” Craig said in an interview with RCCHC’s Erin Storie. “I’ve loved my experience here. It was very nice coming back to Ahoskie.”

During her time at RCCHC, Craig had the opportunity to interact with many people who knew her previously or worked with her family, including RCCHC’s Chief Medical Officer, Dr. Claudia Richardson.

Dr. Richardson, a native of Ahoskie, is an OBGYN and was also the doctor who delivered Craig.

“Her mother and her grandmother attended the church that I attend,” Richardson added, recalling that she watched Craig’s mother grow up there.

“I have such a sense of pride and awe. I am always excited to see students with local roots doing well,” Richardson also said about seeing someone with a local connection return.

The experience, however, not only connected Craig to her coworkers but also made it easier to connect with the patients too.

While at RCCHC, Craig worked primarily with Dr. Colin Jones to see older patients. She said she learned more about how to take the time to get to know each patient and address all of their concerns.

“I’ve definitely learned how to take care of the whole patient, not just one aspect,” she said.

Craig also said it was a good experience to work at a nonprofit facility such as RCCHC because it’s a way to give back to the community. She said one of her goals for the future is to eventually come back to work in the local Roanoke-Chowan area.

“It’s sort of like planting a seed,” Dr. Richardson said about Craig’s time with RCCHC. “At a time when fewer younger residents are moving back home, it would be good to have her back in the area, even if only for a brief period of time.”

“The people here are like family. You never feel left out,” Craig concluded about the experience.