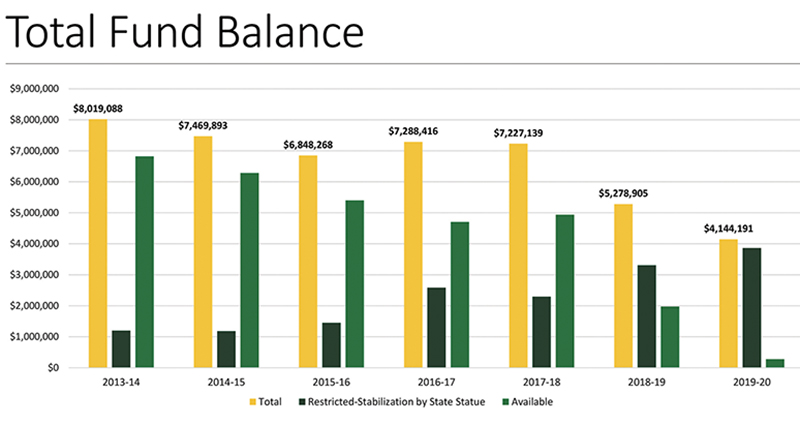 This graph charts the steady decline of Bertie County’s fund balance, which has fallen from just over $8 million during the 2013-14 Fiscal Year to $4.1 million in FY 2019-20. Chart courtesy of Juan Vaughan II

That was one of the topics addressed here at an Aug. 25 work session held by the county’s Board of Commissioners. For nearly 90 minutes, County Manager Juan Vaughan II detailed the reasons behind the dwindling Fund Balance, which has been roughly cut in-half from $8 million back in the 2013-14 Fiscal Year (FY). That has left the county’s available savings account at 1.06 percent of General Fund expenditures.

The county commissioners previously adopted a policy that requires an available fund balance of at least 10 percent of General Fund expenditures. The state requires eight percent.

Vaughan, who was named interim manager in the middle of FY 2019-20, told the commissioners that he couldn’t take responsibility for something that was already in place prior to his arrival.

“I think it’s very important that we don’t make the same mistakes moving forward,” Vaughan said at the outset of his presentation. “It’s important for us to be honest, transparent, and to hold the appropriate people or person accountable.

“I also cannot take full responsibility for the board not knowing we were going to one percent [of available fund balance as a percentage of total expenditures],” Vaughan continued. “William [Roberson, the county’s Finance Officer] nor I knew exactly it would be one percent. However, I think there should have been a general awareness that, number one, it [available fund balance] was going to decline; and, number two, it could possibly be one percent.”

He reminded the board that the budget planning process for FY 2020-21 did not include the use of fund balance because, in Vaughan’s words, “we knew a problem existed at that time.”

He added the same thing was done in building the current FY 2021-22 budget…no use of fund balance.

Using a series of slides containing financial information, Vaughan shared a story that revealed “where we are and how we got here.”

That story began on a positive note as there were no material errors or irregularities/illegal acts found by the firm that audits the Bertie County local government finances.

“That’s great because on top of having a not-so-good financial position and having a declining fund balance, we could have had other issues on top of that had we not had the right measures and policies in place,” Vaughan stressed.

Vaughan said part of the reason for the decline in available Fund Balance was a steady increase in the annual amounts taken from the county’s “savings account” to help balance the General Fund budget at the start of the fiscal year. That amount was in the $500,000 range during both the FY 2013-14 and 2014-15 budget cycles before more than doubling, or even higher, in subsequent years as follows:

Those dollar amounts grew higher during the 12 months of the budget year. Amendments to the actual budgets resulted in money (original and final) appropriated from Fund Balance exceeding two million dollars in all but one budget year from FY 2015-16 to FY 2019-20. Included in that timeline was $2.43 million as a total appropriation in FY 2015-16. The last two budget cycles shown in Vaughan’s presentation (2018-19 and 2019-20) combined to tap the Fund Balance to the tune of $4.51 million.

“There were other expenditures that we added that were not originally budgeted,” Vaughan noted.

“The goal is to always have those two numbers as close to each other as possible,” Vaughan said.

“This suggests that revenues are not the problem,” Vaughan stated.

“In the past we’ve cut back [projected spending] to what is the project revenue,” Commissioner Ron Wesson noted at this stage of Vaughan’s presentation. “We know then that we’re either neutral [even with projected revenue vs. expenditures] or we need to move money from our Fund Balance.”

Roberson interjected at this point that Fund Balance has been appropriated for the past five-to-six years.

“Last year and this year are the first times since I’ve been here that I’ve done a budget without using Fund Balance,” Roberson said.

Wesson suggested that the budget numbers that the commissioners ponder each year need to be a “true balanced budget without taking in fund balance.”

“If something comes up during the year that requires spending money not originally budgeted, we need to look first in finding ways to cut an equal amount out of the budget to account for the new expenditure,” Wesson added.

Vaughan then highlighted a few of the expenditures that were paid for by appropriating fund balance over the years:

Security improvements for the school system: $100,000;

Staff recruitment/retention at the regional jail: $70,000;

Raises/salary adjustments for the Sheriff’s Office: $372,662;

Increase for contribution to the retirement system: $104,953;

Then there is money allocated to the county (reimbursements from FEMA for hurricanes, and later for COVID-19; and grants from other entities ) that came in after a new fiscal year’s budget was adopted. For FY 2018-19 and 2019-20, the delayed reimbursements totaled a little over $1.8 million.

“For the last couple of years we’ve run into situations where money not coming in in a timely fashion had affected our Fund Balance,” Roberson stressed.

“Last year, we knew that based on that year’s budget, and the current spending to date, we needed to cut to remain within our budget track, and we did that,” Wesson said. “We took a five percent cut. This year we did not appropriate any fund balance. But the problem was that the prior two years we never had the previous two years completed audits in house when we made budget decisions. We didn’t know exactly where we stood; what the starting point was. That’s what happens with late audits.

“When you don’t know what the starting point is then you’re doomed to have a problem,” Wesson added. ‘When we finally got the real numbers they were worst than we thought. We would have never appropriated the monies we did had we known what the prior year was.”

Vaughan’s proposed solutions to the financial issues included at least two straight fiscal years without appropriating any fund balance (the current FY 2021-22 budget does just that); when expenses are added, find a source of revenue or reduce expenses in other areas; reduce the General Fund budget in two straight years (the current FY 2021-22 starts that trend); department heads should seek ways to increase revenues and/or grant opportunities; and as county employment positions become available, access the need for filling those vacancies.

He also kept the door ajar for a possible increase in property taxes next year. However, that final decision is in the hands of the commissioners.