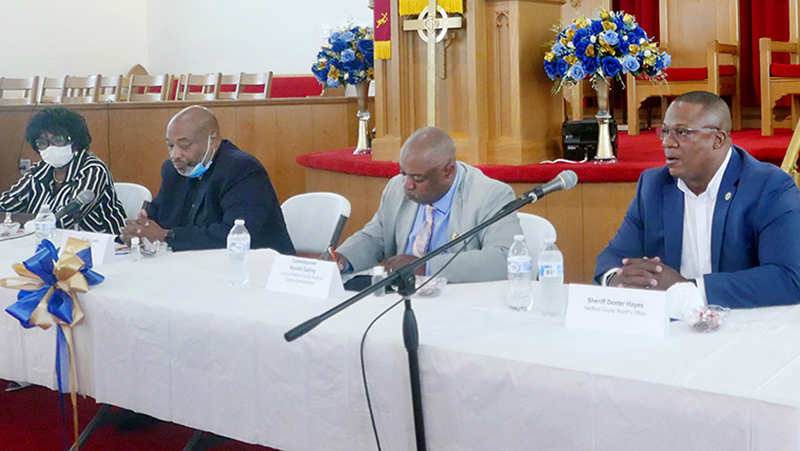 AHOSKIE – A group of local leaders from all walks of life shared their perspectives on issues affecting Hertford County’s African-American citizens.

Dr. Viola Vaughan-Holland, President of the Hertford County Chapter of the National Association for the Advancement of Colored People (NAACP); Commissioner Ronald Gatling, Chair of Hertford County Board of County Commissioners; Attorney W. Rob Lewis of Lewis Law Offices, PLLC; and Hertford County Sheriff Dexter Hayes comprised a panel that participated in a recent forum. That event was part of the unveiling ceremony of the Civil Rights Trail historic marker on Saturday, Aug. 28 at New Ahoskie Baptist Church (NABC).

The question and answer forum was moderated by Hertford County native and Washington, DC resident Marvin Tupper Jones of the Chowan Discovery Group.

“Our African-American history is being documented more than at any time in our history,” Jones began. “This makes us more proud and aware of our possibilities.

“There are more books, opportunities, and experiences due to civil rights victories,” Jones continued. “What can citizen organizations –fraternal, trade, social, professional and religious groups – do to enhance our community within the infrastructures of voting, educational opportunities, jobs, housing, health, internet access and financial support?”

The first question was how to get people to vote.

“Citizens aren’t always sure of the candidates’ platforms,” Vaughan-Holland said. “Candidates should stand up and be a man or woman of your word – say what you mean, and mean what you say. Then, citizens will have someone to look up to.”

“Candidates must be knowledgeable and intelligent enough to get their point across,” Gatling noted as he emphasized the importance of looking directly at people and making one’s point calmly.

“Elect the best person to serve you – get people involved,” Gatling added.

Lewis spoke of being proactive.

“We need to go to places we don’t usually go,” he said. “We need to let our constituents understand it’s in their best interest to vote.”

Hayes stated people should go to their elected officials to make changes.

“It’s our responsibility to meet people where they are,” stressed the Sheriff.

Jones’ second question addressed how to encourage people to work with law enforcement.

“Diversity is important,” Hayes said. “We have African-American and Hispanic officers. You must have the community’s trust – be transparent, be willing to communicate to people as their leader.”

“We must give law enforcement the support they need,” Gatling said. “They must protect citizens and themselves. We (government officials) keep communication open, so law enforcement can come to us for what they need.”

“We need to build trust in our community, so the system will work as it should,” he stated.

“Think of the homes the police must go in,” Vaughan-Holland said. “They don’t know if they’re coming out or not.”

Referring to her education experience, Vaughan-Holland asked why teachers have to call police for pre-kindergarten students.

“Let’s do the best we can to support Sheriff Hayes and law enforcement,” she insisted.

He gave a personal example in which he sought help from a behavioral specialist.

“I broke the cycle. Until society deals with what constitutes healthy parenting, you’ll have a victim situation,” Scott remarked.

Jones asked for solutions at the individual level.

Lewis referred to the story in the Bible, in which a boy engaged in self-destructive behavior.

“We need to have more youth programs, bring kids to church. There must be moral authority,” Lewis said.

“I’d like to see every Hertford County resident join the NAACP,” Vaughan-Holland replied. She explained that if people are members, they would not hesitate to request help when needed.

“We have many groups in Hertford County,” Hayes noted. “If we galvanize all these groups, we can win a lot more kids. We’ve got to find a way to attract our kids, find their interests, get the parents there. So, while someone’s saving our kids, someone can save our parents. We need to find ordinary people who have scars, because if you haven’t been through anything, you can’t teach them anything.”

A former NABC pastor, whose name was not given, was commended for his involvement with church youth.

“He took kids to football games, cookouts, parades and the park,” Gatling reflected. “That might have been the most powerful example of mentoring or one-on-one (involvement) I’ve seen in Hertford County in the last ten years. And I’m not a member here.

“This youth program had an impact on a lot of young people,” Gatling stressed. “Many (youth) are in college, but they still talk about it.”

“Faith and courage will move a lot of the recommendations coming out of this panel,” he stressed.

He also mentioned self-reliance and using service providers in the area.

The final question addressed how to boost education among children and adults in Hertford County.

“I encourage my daughter to find friends who are going in the same direction,” Hayes said.

“It’s going to take the Black church to create a nexus between the church and our community,” he said.

Quoting Methodism founder John Wesley, the pastor said, “You find God not only between the pew and prayer, but in making life better for everybody else.”

“I remember plumbing, HVAC, bricklaying in high school. We need to put pressure on leaders to ensure that we can educate our people. Everybody’s not going to be a LeBron James. We have people walking around with no skills, no critical thinking,” Daniels concluded.