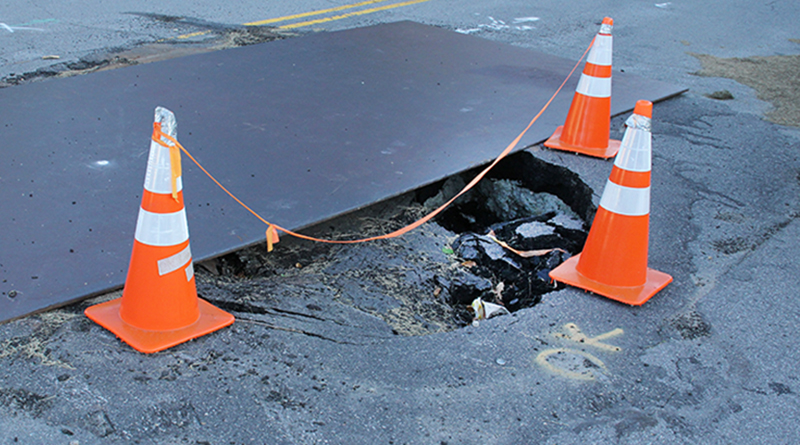 A collapsed manhole at the intersection of Catherine Creek Road and Hayes Street is to blame for the detour around this busy Ahoskie street for the past two months. Staff Photo by Cal Bryant

AHOSKIE – This town’s oldest road remains closed in one spot…but hopefully for not much longer.

Catherine Creek Road, at its intersection with Hayes Street, has been closed for two months, causing headaches for the residents there as well as local motorists.

The roadway at that particular spot, especially in the southbound lane, has been repaved on several occasions over recent years. However, a severe “dip” in the road will soon form there.

“This manhole connects several storm drain lines that serve areas around Catherine Creek Road and Hayes Street,” stated Clemmon W. “Win” Bridgers, Jr., Deputy Division Engineer for NCDOT Division One. “It is an old brick manhole that has reached the end of its useful life.”

Bridgers said that due to the size of the manhole, the number of lines feeding in and out of it, and the surrounding sanitary sewer and water lines, NCDOT – responsible for the maintenance of Catherine Creek Road despite it being inside the Ahoskie town limits – is designing a plan to fix the manhole.

“We are finalizing the plans and contract documents now, and fully intend to advertise the contract within the next one to two weeks,” he said.

Bridgers added that the advertisement period will be three weeks. Once the contract is awarded, the successful bidder will have approximately 45 days to complete the work.

NCDOT will cover the entire cost of the repairs.

“We fully understand the inconvenience this road closure has caused our residents and motorists,” said Ahoskie Town Manager Kerry McDuffie. “We also understand that these repairs have taken a while to plan for and implement, but we want to ensure that these plans to fix this problem area are done right.

“We appreciate DOT moving forward with these repairs and we look forward to having the street back open,” McDuffie concluded.