WINDSOR – Keveon Rodgers threw for 204 yards and four touchdowns, including a pair to Israel Powell, while the Hertford County defense pitched a shutout as the Bears blanked Bertie, 57-0, in non-conference football action here Friday night.

The Bears improved to 2-1 overall with the win.

For Bertie, it marked their first time on the gridiron since November 2019. The Falcons, now under first-year head coach Collin Sneed, did not field a team in 2020, due to the COVID-19 pandemic, nor did they participate in a shortened season held earlier this year. 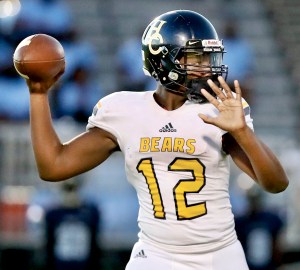 Sophomore quarterback Keveon Rodgers completed 6-of-10 passes for 204 yards and four touchdowns to lead Hertford County to a 57-0 road win at Bertie on Friday. Photo by William Anthony

The Falcons also had their first two games of the current campaign canceled due to the team being placed in COVID protocol. They returned to the practice field on Aug. 30.

Combined, that idle time took its toll as the Falcons mustered only 50 yards of total offense (21 rushing on 29 attempts and 29 through the air). Their only sustained drive – led by the feet and arm of quarterback Joseph Morris – came late in the second quarter where Bertie used seven plays to reach Hertford County’s 36 yardline. However, a pair of motion penalties and a sack of Morris by Bears defender Ansari Williams forced the Falcons to punt from their own 47 yardline.

Bertie would net only two more first downs, one by penalty, for the remainder of the game.

Meanwhile, Hertford County’s offense was clicking on all cylinders. The Bears rushed for 197 yards on 18 carries while passing for 204.

Rodgers tossed three TD passes in the first half – 25 and 28 yards to Powell and a 66-yard strike to Chorii Woods.

Sean Cruz scored twice over the opening two quarters, one on a 13-yard run while the other came when he scooped up a Bertie fumble and raced 21 yards to paydirt.

Bryant Williams added a 48-yard touchdown on a punt return as the Bears cruised to a 39-0 halftime lead.

Hertford County padded that lead to 45-0 on the first snap of the second half where Rodgers tossed a 51-yard scoring strike to Jayden Daniels.

The Bears added a pair of fourth quarter touchdowns on scoring runs of three yards by Cademus Walden and 35 yards by Tyree Coatney.