GATESVILLE – Gates County officials are moving forward with a plan that targets expansion of broadband internet services within the county’s borders.

At their most recent meeting, the county’s Board of Commissioners received an update on the application of a grant in the amount of $1,988,385 from the NTIA (National Telecommunications and Information Administration, an agency of the U.S. Dept. of Commerce).

Additionally, the commissioners approved a resolution in support of the Roanoke Connect Broadband Project as the county seeks to have affordable broadband deployed within its borders.

The county had previously formed an alliance with Roanoke Connect and is a member of the Rural Digital Divide Taskforce, which includes Gates, Bertie, Halifax, Hertford, and Northampton counties. 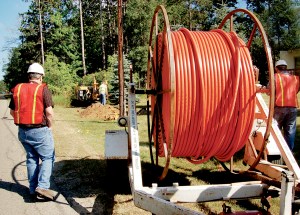 What started as a plan in 2016 to connect its substations through a fiber network led Roanoke Electric officials to develop what is now the Roanoke Connect program, a buildout of high-speed, fiber optic broadband to residents and businesses within its five-county footprint. File Photo

Dr. Althea Riddick, Chair of the Gates County Board of Commissioners, provided her colleagues with an update on efforts to form regional partnerships with an entity to provide broadband.

She said in Gates County, Roanoke Connect will utilize the existing dark fiber and the fiber backbone connecting the substations of Roanoke Electric Membership Corporation to deploy a hybrid solution of fiber to the premise (FTTP) and fixed wireless solution. The FTTP has a capacity of 1 G Mbps symmetrical. The fixed wireless offers 250 Mbps download and a 80 Mbps upload that will connect the communities of Sunbury to Holly Grove to Corapeake to Gates to Eure to Gatesville and Hobbsville.

These communities will be connected with fiber that is designed for future capacity within the network, including equipment hub expansion at REC’s Eason Crossroad and Roduco substations as well as the number of fiber strands (288 strand). The towns will act as the hubs with the fixed wireless solution deployed within the communities and additional fiber deployed from the towns out to the most rural areas of Gates County.

The budget includes services to seven towns/townships and an estimated 1,260 households.

“We [board of commissioners] have been asked to partner with Roanoke Electric Cooperative [Roanoke Connect program] and the Albemarle Commission,” Riddick said. “Roanoke Electric already has some of the needed infrastructure in place by connecting all their substations with fiber,” Riddick noted.

She added that if the county’s NTIA grant is approved, Roanoke Connect Holdings LLC can use those funds for broadband planning, management, buildout, and deployment.

“We will find out in November if we have been awarded this grant,” Riddick said. “If we don’t get this grant, it doesn’t stop our effort, rather it just slows us down.”

Commissioner Linda Hofler updated the board on the possible broadband alliance with the Albemarle Commission, a coalition of 10 counties in northeastern North Carolina.

“They have a broadband initiative as well,” Hofler explained. “These are small counties who can’t go it alone. They have a whole community approach.”

She stated that some of the broadband infrastructure is already in place, linking county governments, and school systems.

“That’s the first step in the process; what they want is to expand capacity,” Hofler said. “Demand for broadband went up 40 percent in our region last year because of COVID. For economic development, we need to expand broadband here. Businesses don’t want to come without access to broadband. We need universal service that’s reliable and cost effective. The Albemarle Commission will own the fiber and will lease it out to the providers and will control the price.”

Riddick cautioned the board about what may become a supply-and-demand issue no matter which broadband partner they choose.

“With the supply chain like it is and then everyone wants fiber, guess what, it’s going to back it up; everybody will be placing orders at once,” she suggested. “That may slow us down, but not because of something we’ve done on our end.”

Hearing earlier that municipalities may have the opportunity to submit grants for broadband expansion from another funding source, Commissioner Jack Owens asked if the county needed to open dialogue with Town of Gatesville leaders to ensure everyone was “on the same page” when it comes to the possible flow of funding into the county.

Roanoke Electric representative Reba Green-Holley was at the meeting where she reminded everyone that the Roanoke Connect program wasn’t confined only to member-owners of the Cooperative.

“When this broadband does come through and you’re not a Roanoke Electric member, you can go on our website (www.roanokeelectic.com), fill out a survey with your address and let us know you want it,” Green-Holley stated. “Our marketing people will contact those individuals.”

She added that Roanoke Connect was making an effort to cover as much territory as they can with the grant funding that’s available.

She went on to explain that legacy providers will purposely submit low bids ($10,000 per mile compared to $37,000,) in an effort to, “block census tracts and then no other provider can come in to that census tract. Then they don’t provide the service and instead pay the clawback, which is the penalty for not providing it, but they can afford it and still block other potential providers,” Green-Holley explained.

“If a service provider doesn’t go to that last mile, it’s not giving Gates County any help whatsoever,” she concluded.

Later in the meeting, the commissioners voted unanimously to approve a resolution in support of the Roanoke Connect Broadband Project as the county seeks to have affordable broadband deployed within its borders.

As far as its timetable, Roanoke Connect said it will be able to extend the fiber network along primary routes built in 2021 throughout 2022-23. Locations currently not residing on primary fiber routes will initially be serviced using fixed wireless access. As additional funds become available and saturation rates increase, FTTP will be able to replace the fixed wireless access.

“We are continuing to seek other grant opportunities to continue to fund this expensive endeavor,” Riddick stated.

She added that despite the county receiving one-half of its $1.4 million of American Rescue Plan funding from the federal government, that pool of money cannot be spent on broadband at the current time.