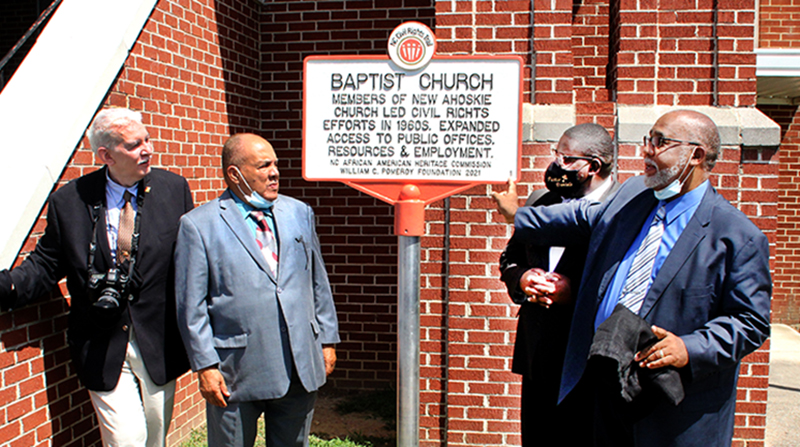 Charlie Morris (right), Chairman of the New Ahoskie Baptist Board of Deacons, points out that the Civil Rights Trail marker erected Saturday at the church is the first of its kind in North Carolina. Joining Morris in unveiling the marker were, from left, Marvin Jones, Rev. Dr. John L. Scott, and Pastor Dorian T. Daniels. Staff Photo by Cal Bryant

AHOSKIE – It’s hard to imagine a place where people of color were segregated from society.

A place where the simple pleasures of life – shopping, arts & entertainment, and even the freedom to choose a place of higher learning or to receive proper medical care – were off-limits to one race.

And they didn’t even have the right to cast ballots for those who maintained a vice-like grip on local, state and federal politics.

Thankfully, those days of social and moral injustice have ended, but not without the blood, sweat, and tears of men and women who stood up and challenged the status quo of that period of history.

This past Saturday, on the grounds of the historic New Ahoskie Baptist Church – a place where Blacks of the local area have found comfort and refuge from physical and mental suffering since its founding in 1866 – a first-of-its-kind information marker was unveiled. Its inscription hailed the church leaders and members of the 1960’s for leading the Civil Rights efforts locally, helping to pave the way for expanded access to public offices, resources, and employment for the Black community.

The marker is the first of what are many others to come across the state, part of an effort by the NC African American Heritage Commission’s Civil Rights Trail.

Rev. Dr. John L. Scott recalled those troublesome times when he arrived, fresh out of the seminary, in 1963 as the pastor of New Ahoskie Baptist. In an impromptu interview prior to addressing the audience gathered Saturday at the church, Scott shared stories of a segregated society…banned from the local movie theater, having to drink water from a separate fountain, and prohibited from simply sitting at a lunch counter and enjoying a sandwich.

“We could buy clothes from the white merchants here in town, but we couldn’t try them on beforehand,” he recalled. “And then there was the voting rights issue. Yes, we were allowed to attempt to register [to vote] but they would make us take a test with all those ludicrous questions, things like how many bubbles does a bar of soap make. They were just looking for ways to prevent us from voting.”

Later, during the formal presentation, Scott shared a story about how the white-owned newspaper (what is today the Roanoke-Chowan News-Herald) came out in support of the Blacks to hold peaceful demonstrations in public.

“We found allies in pockets of the white community, particularly from Marie Woods and Roy Parker Sr., then the editor and the publisher of the News-Herald,” Scott recalled. “They were not antagonists, but rather a shining light. I remember the time when the [Ahoskie] Town Council was going to pass a law that prohibited demonstrations here. Mr. Parker stood up and opposed it.”

In another effort to bring attention to Civil Rights, Scott recalled taking part in the integration of the old Tomahawk Restaurant.

Scott spoke of the local, state and national visionaries who stood at the forefront of the Civil Rights movement.

“This didn’t happen by accident, it took leadership and a faith in God to lead us in the right direction,” he said. “God is a waymaker.

“The convergence of events and personalities who felt the heartbeat of history were willing to stand and move to make things better,” Scott added.

Marvin Jones, a native of Cofield who founded the Chowan Discovery Group and is a noted national historian on tri-racial composition of the local area, served as the main speaker at the marker’s unveiling. It was through his efforts that the Civil Rights Trail marker now stands near the base of the steps leading into the church.

As a child, he recalled coming to New Ahoskie Baptist with his father, Tupper Jones, for several Civil Rights rallies held at the church.

“He brought my sister and I to the rallies. We even got to hear Golden Frinks who spoke in this sanctuary one evening,” Jones shared.

In addition to learning about the Civil Rights movement across the south and beyond, Jones talked about the local efforts of Rev. Dr. Scott.

“We all know the enormous effect of his commitment to our community,” Jones said. “His autobiography, CIVIL RIGHTS VOICE FOR THE OPPRESSED, tells so much about Civil Rights actions of the 1960s in Hertford County and of his leadership. Please get a copy to read and to gift – Christmas is coming sooner than you think.

“I learned about the Civil Rights efforts to improve voting and electing leaders from our community – we didn’t have those back then – education, healthcare, public safety, public access, employment and housing,” Jones noted.

He also praised the efforts of those on the front lines locally in the fight for Civil Rights. Jones said among the activists named by Scott in his book were Rev. William Tyree, Gerald Tyree, Raymond Grant, Clarence Shaw Newsome and Roy Marsh – all of New Ahoskie; Rev. James A. Felton of Winton; Rev. Melvin Creecy of Murfreesboro; Rev. Chester A. Hart of Philippi Baptist, Harrellsville Chapel Baptist and other churches; and George Hall Jr., Collis Brown, Augustus Chavis and Howard Hunter Sr. of Pleasant Plains Church.

“George Hall Jr., supported by the local NAACP, even took part in the historic last march from Selma to Montgomery in Alabama,” Jones recalled. “There he met Viola Liuzzo, a volunteer from Michigan who was killed during that time by the Ku Klux Klan.

“This new marker reminds me of what we accomplished during the 1960s and beyond. I have an appreciation of the yields from those accomplishments, and how we built upon them. I commend the New Ahoskie Baptist Church family, past and present, and its ongoing strength for advancing faith and social justice,” Jones concluded.

Charlie Morris, Chairman of the New Ahoskie Baptist Board of Deacons, spoke of the founding of the church, which started just after the end of slavery.

“It was a time where you didn’t have much, and you didn’t know much, but you knew that God has brought us through and you knew that with him on your side, you could accomplish anything,” Morris said. “It was from those humble beginnings that we celebrate today.

“This church has been a pillar of the community from its beginning, and it’s our role to remain a pillar,” he added.

Morris and Jones paid tribute to an individual that served as a role model and mentor to them, Ethel Tyree, who just recently passed away. She was the clerk and a deaconess at New Ahoskie Baptist, and a well-known historian and former school librarian.

Also taking part in the ceremony was Viola Yates Parker. She is a descendant of the Jenkins family that donated the land on which the church stands today. The family has longed served New Ahoskie Baptist in leadership roles.

“The marker that will be unveiled today signifies what the Jenkins family had in mind for this church….a place that looked toward the future from the struggles we went through to acquire this land, and build this church for then, now, and for future generations,” she said.

Earl Ijames, African-American History Curator at the NC Museum of History, was invited to be a part of the ceremony.

“We went from Civil War to Civil Rights, but it still took 100 years to integrate our schools and for the Voting Rights Act of 1965,” said Ijames, who added that the filibuster has been used more than 30 times from 1866 to the present to stop the advancement of Civil Rights.”

He praised the elders of New Ahoskie Baptist, those who have passed away, for their vision of what is now seen as the progress of the community where Blacks, whites and Indians can meet in equality and celebrate human rights.

Ijames also brought remarks from the NC African American Heritage Commission, celebrating the fact that New Ahoskie Baptist is the first place in the state of North Carolina to install a Civil Rights Trail Marker.

“This is a place where equality was ushered into this community peacefully, yet firmly,” Ijames shared. “Thank you for making a way in this community and for being a torch for others.”