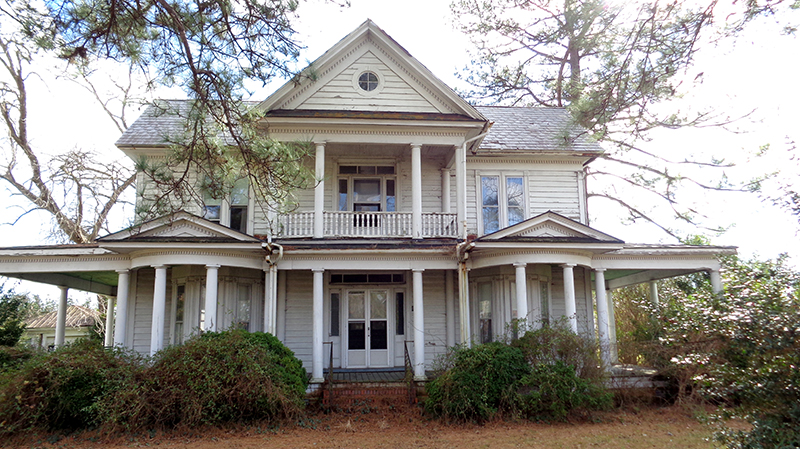 This circa 1895 home in Rich Square will be part of a national TV show slated to air on Monday night. Photo by Freeman Realty

RICH SQUARE – A home constructed here in the late 1800’s will be featured during a national TV show on Monday, Aug. 30.

Home & Garden TV (HGTV) is scheduled to air an episode of its show “Cheap Old Houses” at 9:30 p.m. that will include the home in Rich Square, located on East Jackson Street.

Local realtor Nancy Freeman had the home listed for sale when the film crew arrived in Rich Square this past spring to film the upcoming episode. Freeman said the home has since been sold.

According to an article written by HGTV’s Samantha Pyo, “Cheap Old Houses” traces its roots to the Instagram account of Ethan and Elizabeth Finkelstein. The couple – who have 1.6 million followers on Instagram – has turned their passion for historic properties into a full-time gig on HGTV and discovery+.

The Instagram account and website showcase low-priced, historic homes typically going for less than $100,000 located all around the country. These affordable houses are popular among millennials because of surging rents in larger cities and the possibility of remote work.

For those who just can’t get enough of neoclassical revival homes and vintage schoolhouses, “Cheap Old Houses” also has a subscription service of the same name: Each month, subscribers can get four newsletters that include collections of “Ultra Cheap Old Houses”, “Cheap Old Farmhouses”, “Cheap Old Houses Abroad” and “Cheap(ish) Old Houses.” While most of the houses shown on the account and the newsletters need a lot of renovation in order to be livable, part of the charm is revitalizing old and abandoned homes while simultaneously preserving their historic significance.

Although they aren’t real estate agents or professionals, Elizabeth Finkelstein has a Master’s in historical preservation while her husband has experience in digital marketing. They eventually turned their social media following into a full-time job.

The duo receives thousands of emails from hopeful future homeowners who are on the hunt for their dream historic home, as well as new homeowners who have already restored their own cheap, old house with a little TLC.

After four years of filling HGTV feeds with historic, affordable gems on the market, the wildly popular Instagram phenomenon is finally coming to the screens of all property aficionados with a 10-episode series that made its premiere on Aug. 9. Viewers will follow Elizabeth and Ethan Finkelstein as they explore small towns and cities in search of the perfect old homes to share with their 1.6 million followers.

They’ll go through the antique spaces, uncovering special architectural features as well as historically significant pieces that may be considered valuable today. Viewers will be able to get a behind-the-scenes glimpse at the selective vetting process the duo goes through before picking which home to show on their account.

At the end of each episode they will ultimately have to choose between two low-priced properties to see which one will get the final feature on their Instagram account. Along the way, they’ll share the stories and unique architectural elements behind each home as well as their own vision for the house if given the chance to renovate.

With the help of 3D animations, viewers will be able to see the original design details in each house and what it could look like in the future after restoration. Elizabeth and Ethan will also showcase a “Saved Old Home” every episode, a property previously exhibited on Cheap Old Houses that has been transformed from an old house to one that is beautiful and completely livable.

You can get the latest updates on the Finkelstein’s historic homes at @cheapoldhouses or @hgtv on Instagram.