Smith has served two full terms as the county’s top ranking law enforcement officer. He was initially elected in 2014 after spending one year as the appointed sheriff, filling out the unexpired term of Wardie Vincent Sr. who retired early. Smith won reelection in 2018.

“I am a man of faith and second chances,” Smith said. “I constantly strive to be a role model to the law enforcement profession. 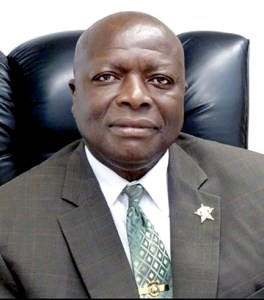 Jack Smith has spent 49 years in law enforcement, including the past eight years as Sheriff of Northampton County. Contributed Photo

“I bring with me 49 years of law enforcement experience to Northampton County as well as exemplary leadership, fairness, and professionalism. I plan to resume and expand upon these traditions while seeking re-election in 2022,” Smith added.

During his time as Sheriff of Northampton County, Smith has overseen an effort to improve his department, which in turn has provided more advanced services to the citizens.

The Sheriff’s Office received several grants recently to purchase and equip body cameras and new body armor for the officers.

NCSO upgraded its Records Management System (RMS), a program designed to help officers and administration keep track of reports and civil processes that will assist with the day-to-day operations of the Sheriff’s Office.

Smith promoted the implementation of the RUOK? Program, which calls each person on the list daily. If unsuccessful after several attempts, a deputy will be dispatched to the residence. This program is free and available to all senior citizens of Northampton County.

All NCSO investigators have completed nearly 400 hours of training and are certified by the State of North Carolina as Investigators. One investigator has been recently promoted and currently enrolled in the course.

Two investigators have been trained and certified using the voice stress analysis test, similar but more accurate than the polygraph test.

“We have one certified hostage negotiator; one certified paramedic; and we have several instructors that can teach various topics including firearms, DWI detection and standardized field sobriety testing, first aid & CPR and rapid deployment,” Smith said.

He added that all school resource officers have attended training and are certified and that over 90 percent of his sworn deputies and detention officers have completed either Crisis Intervention Training or some type of de-escalation training.

The Sheriff’s Office has received several vehicles from the military. These vehicles have saved approximately $250,000 to the taxpayers of Northampton County.

Additionally, the Northampton Sheriff’s Office received a grant to purchase and replace each service weapon that was over 20 years old.

Smith was successful in his effort to increase the starting salaries of his deputies by approximately $9,500 per year since taking office. This was accomplished in part to his excellent working relationship with the county commissioners.

Since 2013, 94 people have been reported missing and all have been located. Meanwhile, homicide arrests are at 75% during this same period.

“We currently house inmates under the misdemeanor confinement program, which brings in over $500,000 per year,” Smith said. “Once Odom Prison gets turned over to the county, we plan to house juveniles from across the state. The total funds could bring approximately $2,500,000 to the county.”

The Northampton County Sheriff’s Office has partnered with Bertie County, Hertford County and Ahoskie Police Department to form the Down East Drug Task Force. It was designed to combat the illegal drug problems in the three counties, which has been very successful, he said.

A native of Martin County, Smith grew up in the small towns of Hamilton and Oak City.

“As a child, I learned the importance of pride and hard work, standing side by side with my own family as sharecroppers,” Smith said. “The values and principles that were instilled in me as a child are what have guided me into becoming the man that I am today.”

After completion of high school, Smith joined the Marine Corps in 1970, proudly serving with merit for two years, which included one tour of duty in Vietnam.

After receiving an honorable discharge from the Marine Corps, Smith decided to continue along a path of service by becoming a law enforcement officer. He launched that career in 1972 with the Ahoskie Police Department.

“There I gained knowledge of the profession and the understanding of the community in which I served,” Smith recalled.

In 1974, Smith became one of the few African American troopers with the North Carolina State Highway Patrol.

“I dedicated 30 years of creditable service, during which time I advanced through the ranks and retired as Lieutenant on November 1, 2001,” Smith stated.

In 2002, after retiring from the highway patrol, Smith began working with the Nash County Sheriff’s Office. Five years later he accepted the job as Chief of the Enfield Police Department and served in that position until he was appointed in 2010 as Chief Deputy with the Nash County Sheriff’s Office. He served in that role until 2013.

Smith serves as the Vice President of the North Carolina Education and Training Standards Division, which is tasked with overseeing and supervising all Deputy Sheriffs, Detention Officers, and telecommunication personnel.

“As your Sheriff, my staff and I always put your concerns on our shoulders every day,” Smith said. “We all must work together to make our communities as safe as possible, because working together works! We must ensure the rights of everyone are respected, while serving with loyalty, integrity, honor, and professionalism.

“I humbly ask for your support, teamwork, and your vote in the March 2022 Northampton County Sheriff’s election as we continue to serve our citizens faithfully,” he concluded.