JACKSON – The Northampton County Board of Commissioners easily approved two rezoning requests at a public hearing held here on Aug. 2. One of those requests will help a local business expand.

David Cooper, owner of Bryant & Lassiter Septic Tank Service, requested to rezone a 3.9-acre parcel of land from Agricultural-Residential (A/R) to Highway Business (HB). The parcel in question is located on Highway 35 outside of Woodland and is adjacent to the parcel that the business is located on. Cooper is the property owner of both parcels. 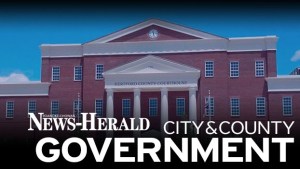 The rezoning request is being made so that the business may construct a new office building and increase the available parking area.

The Northampton County Planning Board recommended approval, stating that they believe the proposed rezoning is consistent with the county’s new comprehensive land use plan.

“We’re a business that’s probably close to 50 years old at this point. We’ve been here a long time,” Cooper said during the public hearing, noting that the business now had a need for a bigger office with more space for inventory as they continue to serve Northampton and the surrounding counties.

There were no other public comments, and the commissioners had no comments or questions on the proposed rezoning either.

Commissioner Joyce Buffaloe motioned to approve, and Commissioner Kelvin Edwards seconded. The vote was unanimously in favor with those in attendance. Commissioner Geneva Faulkner was unable to attend the meeting.

The other rezoning request came from a property owner who wished to construct a residence on his land which was zoned as Heavy Industrial (HI). If approved, a 10-acre portion in the corner of the 138-acre parcel on Highway 46 outside of Garysburg would be rezoned as Agricultural-Residential, leaving the rest zoned as HI.

A representative for the landowners noted that there was already an existing residential structure on the 10-acre parcel, and the property was near several other residences which were also zoned A-R.

The Planning Board also had a favorable recommendation for this request.

Like the other rezoning proposal, the Board did not have any discussion other than a unanimous vote on the matter. Commissioner Nicole Boone provided the motion, and Buffaloe seconded.

“I wish all of (the rezoning requests) were like this,” said Board Chair Charles Tyner after the hearings concluded.

Tyner said having more rooftops and expanding businesses would benefit the county in different ways, including increasing tax revenue.