AHOSKIE – An expert on the design of aviation facilities has completed his study of a proposed helipad that Vidant Roanoke-Chowan Hospital wishes to build on its property.

Jay Talbert, an engineer hired by the Town of Ahoskie, studied the helipad’s site design as presented in June by an engineering firm under contract with Vidant officials.

Talbert’s company, based in Wilmington, has over 30 years of experience in the design of aviation facilities. 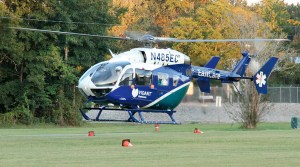 One of the Vidant EastCare helicopters makes a landing at the Ahoskie Creek Recreational Complex. Plans are currently in the works to construct a helipad in Ahoskie adjacent to Vidant Roanoke-Chowan Hospital. File Photo / Cal Bryant

Vidant RCH has applied to the town for a special use permit to construct the helipad on the hospital’s property located on the south side of West Memorial Drive. That particular area currently serves as a parking lot for physicians working at Vidant RCH.

Meanwhile, while town officials are in favor of the helipad, they have debated, over the course of several months, if the site chosen by the hospital is the correct one. It appears that town officials favor a location on the north side of the hospital in an area that once was used as a valet parking lot (adjacent to the main visitors parking lot).

Talbert presented the findings of his study at a meeting of the Ahoskie Town Council and Planning Board on Monday of this week. There, he said the work on the helipad project performed by The East Group, an engineering/architectural firm specializing in healthcare and industrial site design, met all his expectations.

As to Vidant’s preferred location of the helipad, Talbert said he noted there are a couple of structures that are fairly close to where the helicopter will touch down, but those buildings are owned by the hospital.

“There is a residence close by, but to my understanding from the property owner that home is currently for sale,” Talbert said.

“I also received a call from a Mr. and Mrs. Daniels; they were very cordial and let me know that they were concerned about noise and property value,” he added.

Talbert spoke of a noise study performed by The East Group that measured sound at ground level, saying at liftoff the noise caused by a helicopter was 81 decibels.

“There are ways and techniques to mitigate that noise, to include sound barrier walls or vegetative buffers,” Talbert noted.

He talked about the helipad approach zone, which is roughly 4,000 feet in length.

“The more you can do to make it a safe operation is a step in the right direction,” Talbert said. “Helicopters, by their very nature, create downdraft.”

Talbert offered his opinion regarding the two possible locations of the helipad.

“I’ve ridden around the neighborhood and I know there are concerns by [residents] living behind site #1 [physicians parking lot]; I don’t believe those concerns will go away if you move the helipad to the other side of the hospital [valet parking lot]. There are residents living near there as well.”

Concerns were shared about traffic safety. Meryl Brown, a member of the Ahoskie Planning Board, noted that the intersection of Academy Street and Memorial Drive is the busiest in town. The proposed helipad site is less than one-half block from that intersection and Brown stated her concern about a possible increase in motor vehicle accidents as drivers become distracted by a helicopter taking off or landing.

Brown said compounding the issue is the fact that ambulances coming to the Vidant RCH Emergency Room use West Memorial Drive, placing them close to the helipad. There has been previous discussion about having to temporarily close that block of Memorial Drive when patients are being moved from the Emergency Room to the helicopter.

“What happens then, do you jeopardize one life to save another life,” Brown asked.

“Does that [scenario] significantly diminish by moving it [helipad] to the other side of the hospital,” Talbert inquired.

“It moves it away from that intersection and Memorial Drive,” Brown responded.

While he couldn’t say whether that scenario would present itself one day, Talbert noted that less than one medical helicopter a day, on average, lands in Ahoskie.

Talbert said he was of the opinion that neither of the two possible sites held a big advantage over the other.

“Whatever site is picked, it will take the town and the hospital working together to help mitigate any issues,” he stressed.

“It sounds like to me that Vidant has already made up its mind where the helipad is going to go,” stated Town Councilman Charles Reynolds.

“You were given only one site to analyze,” Planning Board Chairman Dennis Deloatch asked Talbert.

“Yes, that’s correct; the one there on Memorial Drive,” Talbert answered.

Talbert answered that the proposed sizes of the pad and the ground level protection zone surrounding that pad meet FAA criteria. However, there are areas beyond that which are not on hospital property.

“The hospital doesn’t have the power of eminent domain like DOT has to purchase right-of-way,” Talbert said, adding that there are some trees located on private property within the 4,000 foot approach zone that need to be removed for the safe operation of the helicopter.

Again the question was posed about placing the helipad at site #2.

“I wasn’t a part of that site selection, but they [Vidant] should show you the process, the evaluation, they went through to narrow their selection to their preferred site,” Talbert said.

As to the next steps, the town council – after learning that Vidant RCH officials made their original application on the incorrect form to request construction of a helipad – instructed town staff to forward a correct form to the hospital.

Meanwhile, Town Manager Kerry McDuffie said there were some other items, not pertaining to the ordinance, that the town needs to address with Vidant RCH. Among those items is a raised “tabletop” speed bump that will allow stretchers carrying patients to the helicopter a smooth ride across the street. Another item is closing off Memorial Drive (between Academy Street and Curtis Street) when a helicopter is either landing or departing.

The mention of those extra items prompted Deloatch to again promote having the helipad constructed in the valet parking lot.

“We, the Planning Board, made that suggestion to the hospital. There’s a lot less traffic there and it’s much safer,” he said. “But the hospital never chose to look at that option.”

Councilman Charles Freeman pointed out that based upon what Vidant RCH staff had said during previous meetings about the helipad, site 2 was not viable due to the distance from there to the Emergency Room and that patients would have to be wheeled through the main part of the hospital to reach the helipad.

“They said it’s easier [to transport a critical care patient] out the side door [adjacent to Memorial Drive],” Freeman said. “They had told us about both possible sites, but this was a while back before our current town manager was hired and before some of you were on this Council.”