GASTON – A Rocky Mount woman died in a single vehicle motorcycle crash on Interstate 95 in Northampton County on Sunday morning, according to the North Carolina State Highway Patrol.

Trooper Z.E. Perry said Blanche Cheeley, 72, was a passenger on a three-wheeler motorcycle when the vehicle went off the roadway to the left in the northbound lane near the 180 exit. 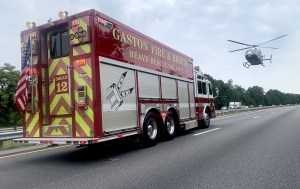 Vidant EastCare prepares to land at the scene of a fatal wreck on I-95 in Northampton County on Sunday morning. Photo by Gaston Fire-Rescue-EMS

The vehicle struck a guardrail and Mrs. Cheeley and James Cheeley, 72, who was driving, were ejected.

Mrs. Cheeley was pronounced deceased at the scene and Mr. Cheeley was airlifted to Vidant Medical Center in Greenville.

Perry said Mr. Cheeley’s condition was not immediately known. He said charges are undetermined and investigation continues to determine what caused the motorcycle to veer off the roadway.

Gaston Fire-Rescue-EMS said in a statement on Sunday it was dispatched to the scene shortly before 8:30 a.m. and firefighters discovered a three-wheeler with heavy damage.

Units remained on scene for nearly an hour and a half, during which time both northbound lanes were closed. Vidant EastCare landed on the scene.