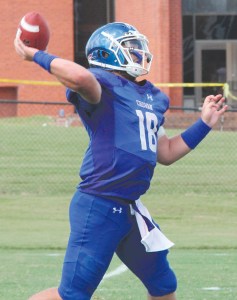 Chowan University quarterback Bryce Witt is among a handful of starters from the 2019 season opting to return to the Hawks program following a year off due to the COVID pandemic. File Photo / Cal Bryant

Head Coach Mark Hall’s era starts with higher expectations from the CIAA Football Coaches Association as the 2021 Chowan Hawks were selected to finish third overall and second in the CIAA Northern Division.

Third overall and second in the Northern Division is the highest the Hawks have been ranked in the CIAA Preseason poll during the Hawks’ tenure in the CIAA. The Hawks sit behind the unanimous selection of Bowie State, 2019 CIAA Football Champions, and Fayetteville State (2019 CIAA Football Finalist).

Watkins lands on the list after posting 41 receptions for 617 yards and nine touchdowns to lead the Hawks in receiving in 2019. Watkins earned All-CIAA Second Team honors after finishing third in touchdowns and fourth in yards in the CIAA.

Keck anchors the offensive line for the Hawks that led the CIAA in total offense in 2019 with 475.1 yards per game.

Wrapping up the preseason selections is Deshaun Wethington. Wethington was named All-CIAA First Team after posting a single-season program record of 1,377 yards and 12 touchdowns.

The Hawks start camp in early August with signal caller, Bryce Witt, and defensive standout, Rafiq Abdul-Wahid, returning on their respective sides of the ball.

Chowan opens the season on the road on Thursday, Sept. 2 against Mars Hill. The Hawks will host Erskine for their home opener on Sept. 18.

Led by reigning CIAA Coach of the Year Damon Wilson, Bowie State finished 2019 with a 11-1 overall record (7-0 in the CIAA) with their lone loss coming in the first round of the NCAA Division II playoffs against Carson-Newman. Fayetteville State, coached by Richard Hayes, also posted a 6-1 conference record (8-3 overall), finishing 10th in Super Region Two for the second straight year in 2019.