Ahoskie to receive over $1 million 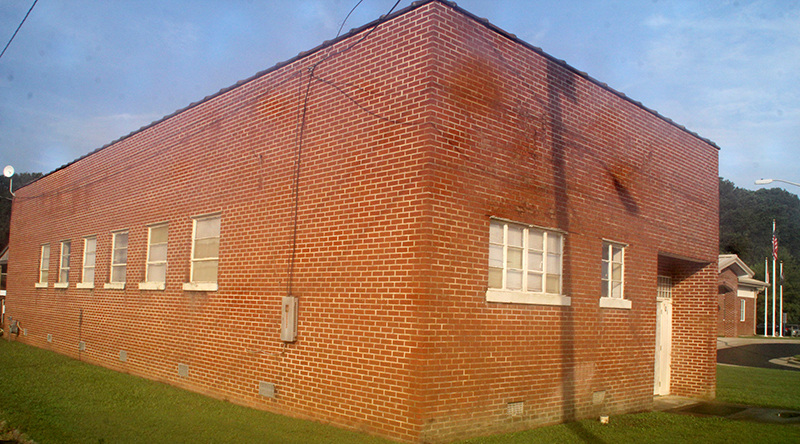 The Community Resource Building, located at the old Band Room adjacent to the Ahoskie Police Department, will be used as a safe space for activities for local youth. Staff Photo by Cal Bryant

AHOSKIE – While the town of Ahoskie hasn’t decided on what to do with the first of two installments of American Rescue Plan (ARP) funding, Mayor Weyling White is suggesting using a tiny amount to provide a safe haven for local youth.

White said the vision of transforming the Community Resource Building into a youth center is part of a campaign by the Ahoskie Community Interventions Task Force. The Mayor said that campaign is entitled “Our Children Matter.”

“That was named by the parents of some of the young victims that lost their lives [during recent gun violence in the town],” White remarked.

At the July 13th regularly scheduled meeting of the Ahoskie Town Council, White told them that the Community Resource Building, which is located at the old Band Room adjacent to the Police Department, will be used as a safe space for local youth. The town owns the building.

“Programming such as mentoring, GED classes, and after-school activities will take place in this building,” White noted. “We are partnering with Roanoke-Chowan Community College to provide GED classes as well as partnering with two community-based organizations that will work directly with our youth to provide mentoring and other programs.”

White stated he would like to see the town use a small portion of its ARP funding to repurpose this building. He said $7,000 is needed as start-up money to purchase items and supplies in an effort to, “bring this building to life.”

“We would like to see these programs get underway when school reopens,” White said.

Councilwoman Jamie Burns asked if educational tutoring would be available at the proposed youth center.

“I feel that’s very important for the kids,” Burns stressed. “I know of some churches that have out-of-school tutoring and activities; it would be good to coordinate with them.”

White added that when school resumes, the Interventions Task Force will hopefully launch a contest to re-name the Community Resource Building.

Without objection, Council approved a motion to use $7,000 of the town’s ARP funds as start-up money for the Community Resource Building.

Town Manager Kerry McDuffie pointed out that Ahoskie, using $170,000 in federal CARES Act funding last year, was able to complete 31 projects. With nearly $1.4 million, McDuffie said the town could invest in about 240 projects.

“We need to put some thought behind how we’re going to use this money,” McDuffie stated. “We have a lot of needy projects.”

He suggested that Council members meet in a workshop session.

“We need to discuss what this money can be used for and what is can’t be used for,” McDuffie stated.

“We have some time and a little more flexibility with this, but there are still some limitations on how we can spend it,” McDuffie noted.

Councilman Charles Reynolds asked if the funds could be used for street repairs. McDuffie said he would have to check into that.

Council members agreed to hold a workshop to discuss the ARP funding.