The contest was played at the Greensboro Coliseum. 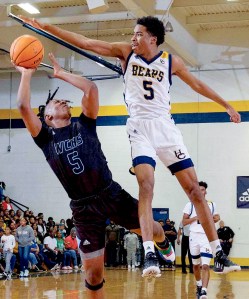 “Daylan was a little nervous to begin with, but he played really well after that,” said veteran Hertford County High School basketball coach Charles Simmons who was in Greensboro to watch the game and attend the annual Coaches Clinic.

“Daylan showed that he belonged there,” said Simmons. “He represented Hertford County extremely well and we were super excited for him and his family to be a part of this All-Star experience.”

Leading the West All-Stars were Daniel Cooper and Chris Ford, both with 20 points.

Askew, a 2021 graduate of Hertford County High School, has signed an athletic scholarship to continue his education and play basketball at Chowan University.