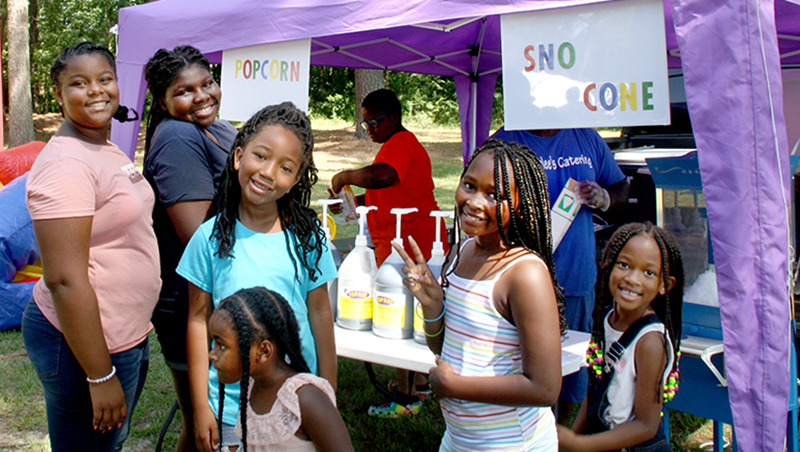 Local youngsters pose for a photo in front of one of the numerous vendors taking part in Saturday’s Youth Extravaganza 2021 held at Riverside Park in Murfreesboro. Photo by Cheryl Deloatch

“This is the first, but it will be an annual event,” said Tammy Mizelle during the opening ceremony.

Mizelle is the elder and first lady of Restoration Temple Church in Murfreesboro, which sponsored the event.

The extravaganza is the vision of Elder Mizelle’s husband, Reverend Derrick Mizelle, church pastor. He gave the opening prayer.

“His vision is for the youth,” Elder Mizelle said. “If you show children love and continue to support them, everything will work out. We need to get ready for what God is going to do in this community.”

“I encouraged Vinetrice to learn this song and invited her to come sing it here today,” she said. 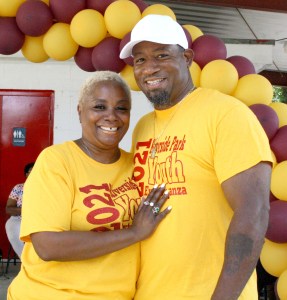 The event was the brainchild of Rev. Derrick Mizelle and his wife, Elder Tammy Mizelle of Restoration Temple Church in Murfreesboro. Photo by Cheryl Deloatch

The daughter of Mr. and Mrs. Thomas Reynolds, Vinetrice is the lead actress in an upcoming movie, “Freedom Of North Carolina.” Ms. Reynolds said more information about the movie appears on its Facebook page. Data also appears on the website www.freedomofnc.info. She will sing during the Murfreesboro Watermelon Festival.

Before singing, Ms. Reynolds shared these encouraging words — “Whatever you want, speak it, don’t just think it.” She rendered a powerful version of “I Believe” by Fantasia Barrino. Several audience members were visibly moved by Reynolds’ performance.

Murfreesboro Mayor Hal Thomas formally welcomed everyone to the town.

“When First Lady Mizelle invited me, her enthusiasm was overwhelming,” he said. “I just had to come.”

Elder Mizelle introduced the president and head coach of the Murfreesboro Raiders Youth Football Team, Yahmale Vaughan. She said, “This team needs your support, and you can make donations at any time.”

“All supporters are sowing a seed in the community,” Vaughan said.

Some vendors spoke during the opening ceremony.

“We need to be a team,” said Brunet Parker, HCPS Public Relations Director. “It’s not about black and white – we need to come together, and this extravaganza is an example of us coming together.”

“I stand here as the sheriff and as a man of God,” Hertford County Sheriff Dexter Hayes said.

Rev. Mizelle showed appreciation for all the vendors.

“I thank everyone for their help,” he said. “It’s not about the individual – it’s about unity.”

“We partner with Rev. and Elder Mizelle,” Co-Pastor Rouson said.

Other vendors provided data on their programs during visits to their booths.

“We welcome students to pre-register for pre-kindergarten (Pre-K),” said Natasha Norman, HCPS Director of Elementary Education. “Registration will be open until all slots are filled. Don’t delay.”

“We’re excited about being part of a community event that highlights positive experiences for children,” HCPS Assistant Superintendent Ward said. “We look forward to seeing everyone in the fall and encourage everyone to check the district website —

“COVID had limited us for so long, it’s nice to get back to the community and support the kids,” Murfreesboro Police Chief David Griffith stated.

Ahoskie Police Chief Asbell stated, “I think one of the biggest things is community involvement with the youth. We don’t want them to get involved in violence, in the streets.”

“I thank every individual for participating in such an extravagant event,” Pastor Mizelle said. “It’s about being unified for the youth in our community and surrounding communities.”