The award is presented in honor and recognition of a superintendent who has demonstrated a strong dedication to public education, commitment to academic excellence, and a continual focus on professional growth and student learning. 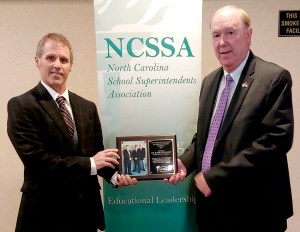 This inaugural award is presented to a superintendent serving a school district in northeast North Carolina who is a member of the Northeast Regional Education Service Alliance (NERESA). NERESA is a professional alliance that supports and enhances educational services and resources for the member districts. These include facilitating professional development opportunities and promoting communication between the districts and state agencies, professional organizations, elected officials, and educational leaders.

Dr. Williams was selected by a committee of NCSSA members.

Being named the first recipient of the award, Dr. Williams stated, “I am extremely honored and humbled to receive the Dr. Dwayne Stallings Leadership Award. I remember back in 2011 a well-distinguished gentleman approached me at a NERESA meeting in Williamston with ‘Hi I’m Dwayne Stallings, the superintendent in Perquimans County. If you ever need anything just let me know.’ A week later he called me on the phone to see how I was doing in my new position, calls which he continued throughout his tenure as superintendent and then as the Executive Director of the NERESA. He also invited me to a church to speak to students.”

Williams said Stallings was more than the superintendent of Perquimans and leader of NERESA.

“He was a mentor and a close friend,” Williams noted. “Dr. Stallings taught me patience, guided me as the Chair of the NERESA and supported my candidacy for Superintendent of the Year when he was the Director of the NERESA. I miss his phone calls. I miss him ribbing me over drinking a protein drink instead of a hearty meal, and more importantly, I miss his friendship. This award means more to me than anyone can ever know and I am truly appreciative of this leadership award in honor of Dr. Dwayne Stallings.”

In selecting the award winner, the following criteria were considered:

Commitment to academic excellence through collaboration with local and state educational leaders.

“He has demonstrated a strong dedication to public education, commitment to academic excellence, and a continual focus on professional growth and student learning for the Gates County Schools. He is very deserving of the leadership award honoring Dr. Stallings,” Hoke stated.

Dr. Williams is in his 11th year as the Superintendent of Schools. He received his bachelor’s degree in Biology at the University of Virginia’s College at Wise, his master’s degree in Educational Leadership and Policy Studies from Virginia Tech, and his doctoral degree in Educational Leadership from Nova Southeastern University. He served two years as a school superintendent in Colorado before taking his current position in North Carolina.

In 2020, Dr. Williams was appointed by Governor Cooper and currently serves on the Board of Trustees for NCCAT and he has served on numerous committees and cohorts in support of public education in North Carolina. Dr. Williams was awarded the Superintendent Leadership Award in the Next Generation NC Program, served on the NCSSA Executive State Board and published a legal paper – “Avoiding Employee Hostile Work Environment Claims Through a Teacher Evaluation System.”

The award is named in honor of Dr. Dwayne Stallings who was serving as the Executive Director of the NERESA at the time of his death on August 9, 2020 at the age of 63.

Dr. Stallings began his career in education teaching in the Chowan, Gates, and Pasquotank school districts. He later served in the Perquimans County School System as the Assistant Principal, and then later as Principal, of Perquimans High School, Principal of Central Elementary School in Winfall, and lastly as Superintendent. Dr. Stallings also served as an Adjunct Professor at ECU after retirement.