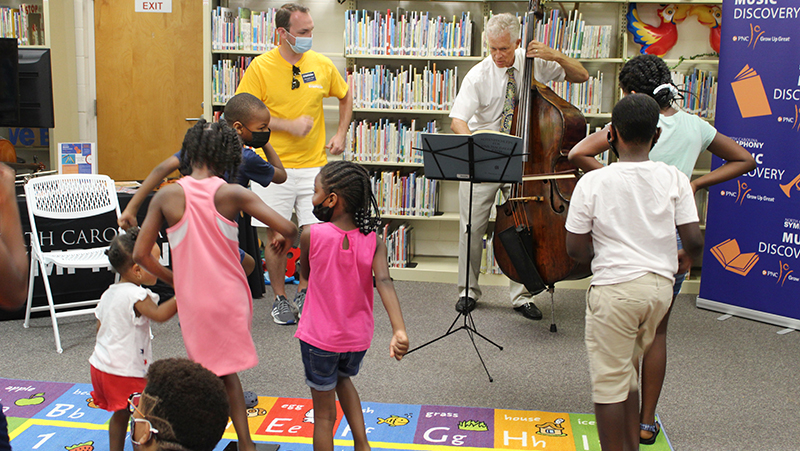 Those attending the July 7 program at the Hertford County Public Library “kick up their heels” as Erik Dyke (background, right) of the North Carolina Symphony performs an upbeat song. Staff Photo by Holly Taylor

WINTON – Young visitors at the Hertford County Public Library were treated to more than just a wide selection of books to choose from here on July 7. They also had an opportunity to learn about music.

The library hosted representatives from the NC Symphony for a short educational program, geared towards elementary-aged children, about the basics of music. The event was a part of the library’s summer reading program, and was made possible by a “Grow Up Great” grant from the PNC group. 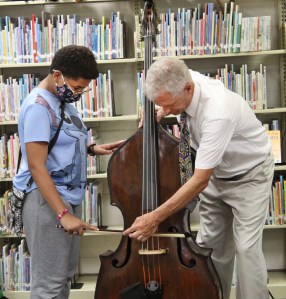 “When you learn to play a musical instrument, it’s like learning a new language. It’s something you can have for your whole life,” explained Erik Dyke, an NC Symphony bass player who conducted the event.

Dyke showed participants a picture book featuring different kinds of instruments that are played in an orchestra, such as strings, woodwinds, brass, and percussion. Afterwards, through playing several different songs on his bass — including “Happy Birthday”, the “Do Re Mi” song, and a few classical pieces from Bach — Dyke demonstrated the three basic parts of music: melody, harmony, and rhythm.

“One of the jobs of the bass player is to hold [the song] together,” Dyke explained before demonstrating a steady beat he would play if he was performing together with the whole orchestra.

The kids also had a chance to get some hands-on experience. Young volunteers stood beside the large upright bass that was taller than themselves and had the opportunity to pluck the strings, hold the bow, and even touch the wooden body of the instrument to feel the sound vibrations produced by each musical note.

“There are many different styles of music,” Dyke said, before demonstrating a song with a slow melody and then a more upbeat, joyful melody.

He encouraged the kids to dance to the upbeat song, and the attendees jumped up to clap their hands and stomp their feet.

In addition to the bass, Dyke also plays the ukulele.

He wrapped up the program with two sing-a-longs with the entire group. While strumming the strings of the ukulele, he and the group sang a rousing rendition of “The Lion Sleeps Tonight” and “Take Me Out to the Ballgame.” 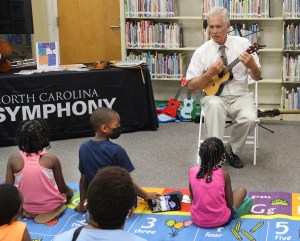 Children join in on a sing-a-long Erik Dyke strums a tune on a ukulele. Staff Photo by Holly Taylor

“Music can be fun, and it’s good for you,” he emphasized, and encouraged the children to pursue music if they were interested in it.

Library Branch Manager Tomeka Roulhac said she was glad to welcome the NC Symphony back for a third time. They weren’t able to visit last year because of the pandemic, but she said she hopes they’ll come back again in the future.