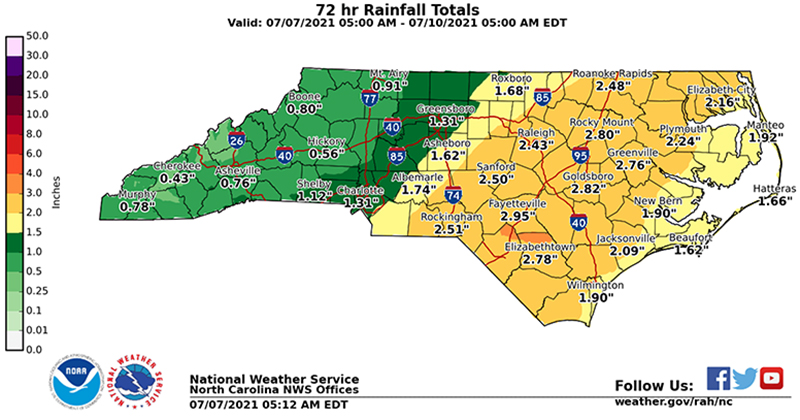 Overnight, the track of Tropical Storm Elsa shifted westward slightly which resulted in a westward expansion of the rain, wind, and tornado threats across North Carolina.

As of 8 am today (Wednesday), Tropical Storm Elsa was located about 35 miles west of Cedar Key Florida, with maximum sustained winds of 65 mph. 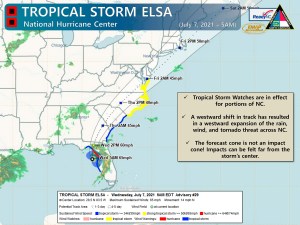 Elsa is currently forecast to be a low-end tropical storm as quickly it tracks over the Carolinas, according to NC Emergency Management. Minor to moderate impacts are still expected across our state, with the greatest impacts during the very late overnight hours tonight/pre-dawn hours Thursday through late Thursday evening. Conditions will improve overnight Thursday as Elsa exits northeastern NC.

“It’s to our benefit right now that the center of the storm system has shifted slightly to the west of us,” said Bertie County Emergency Management Director Mitch Cooper when he gave an update this morning (Wednesday) at a scheduled meeting of the Bertie Board of Commissioners.

“There’s the potential of 2-to-3 inches of rain, with localized areas of up to five inches,” Cooper noted. “That will lead to some instances of flash flooding. We could also see wind gusts in the 20-to-25 mph range, but we are not expecting any storm surge in the sound or the rivers.”

Cooper added that with any tropical system, the potential exists for tornadoes.

“But the further the center of the tropical storm shifts west, it lessens the impact of tornadoes,” he stressed.

Cooper said based on the forward motion of the system as of Wednesday morning, he expects the worst of the storm to impact Bertie County between 5-to-8 p.m. on Thursday. He urged local residents to secure lightweight outdoor items such as lawn furniture. 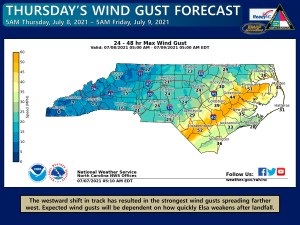 “There are no plans to open shelters, but we are in a state of readiness so we can set up fairly quickly if needed,” he said.

NC Emergency Management said wind gusts in excess of tropical-storm-force are possible on Thursday. The strongest winds will be to the east of the track (mainly along and east of the US-1 corridor), with breezy conditions expected elsewhere.

The Roanoke-Chowan area could see wind gusts in the range of 25-to-30 mph.

A few severe storms including isolated tornadoes will be possible late Wednesday night through Thursday evening, also largely along and east of the US-1 Corridor. Tornadoes associated with tropical systems are generally very brief but can offer little lead time, so it is important to have multiple ways of receiving severe weather alerts.

Significant storm surge is not currently expected. Minor water level rise/coastal flooding will be possible Thursday through early Friday morning. Up to 2 ft. of inundation above ground level is possible within surge prone areas along the coast and sounds, especially soundside portions of the Outer Banks, mainly north of Cape Hatteras.

Strong winds and large waves will create hazardous marine conditions. There will also be an increased rip current risk for much of the remainder of the week.