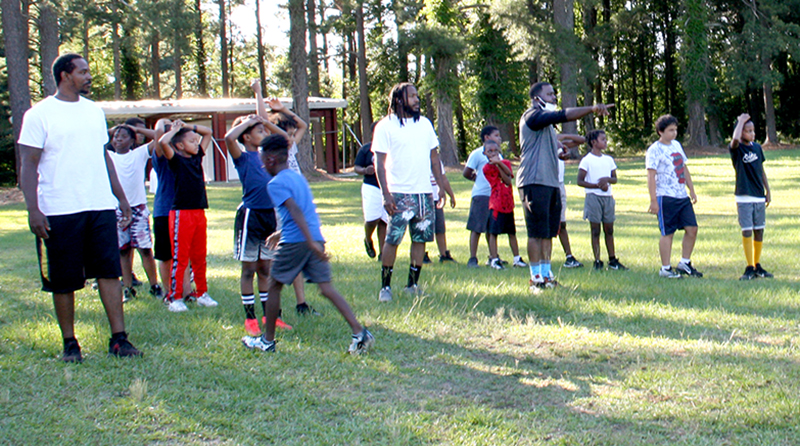 Youngsters from the Murfreesboro area are currently taking part in practice sessions as they prepare to start the Halifax-Northampton Midget Football League season on Sept. 7. Photo by Cheryl Deloatch

Youth living in Murfreesboro, Como and the Mapleton community are welcome to join, Vaughan said. 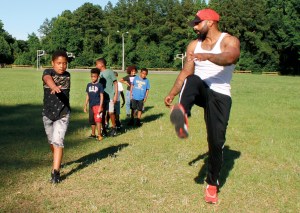 “I try not to recruit in other teams’ areas, but we won’t turn anyone away,” he noted.

“I coached the Jackson Pirates the last three and a half to four years, taking Murfreesboro kids there,” he said. “I decided to try my best to get a team here. We started this year. We tried in 2019 but were unsuccessful.

“Ahoskie has their team – the Ahoskie Bobcats, but there wasn’t anything in Murfreesboro,” Vaughan added.

“We definitely want to teach kids the game, but also want to teach them life lessons,” he stressed. “We want to build self-confidence, camaraderie, good character, and skills that will help them become productive in society.”

The coach, who has family ties in Murfreesboro and Como, is appreciative of donations to the team.

“Numerous people have donated, especially the parents who let their kids come out to play,” Vaughan stated.

“The Murfreesboro Chamber of Commerce and the Town of Murfreesboro have also donated to the team,” Vaughan said.

Also making a donation was the Murfreesboro African American History Coalition and the Murfreesboro High School Class of 1979. Those funds were raised as part of last week’s Juneteenth celebration held at Murfreesboro’s Riverside Park.

“We’re not charging parents, so any donations that come in are welcome,” he stated. “We have to pay football officials, buy concessions like hot dogs, and pay organizational costs. I want to extend a very special thanks to Mount Sinai Church of God in Murfreesboro, whose pastor is Rev. Arthur Clark. They will let us use their church bus [to travel] for away games.” 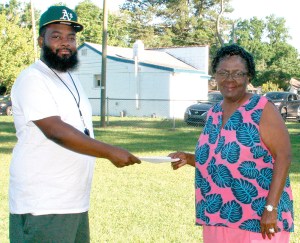 The team is part of the Halifax-Northampton Midget Football League. Their season begins September 7 and home games will be played at Hertford County Middle School.

“We must purchase insurance for the players,” Vaughan said. “I was able to purchase all the equipment – shoulder pads, helmets, practice equipment, et cetera — after a team from the outside the league had folded.”

Parents expressed appreciation for Vaughan’s dedication. “He works with all the kids,” said father Douglas Cox. “It’s not everyday you find people to work with the kids.”

“Ideally, I’d like to have twenty-five players on each team,” Vaughan said. “Right now, we have approximately forty total on both teams.

“The junior varsity team has about twenty-three players and varsity has nineteen so far,” the head coach explained. “We’re still accepting varsity players.”

Vaughan explained there is a weight limit for the kids’ safety.

“For varsity athletes, it is 160 pounds, and 130 pounds for junior varsity. Any child who is close to the weight limit can come and we’ll work with them,” he said.

Practice is held on Mondays, Wednesdays and Thursdays at 6 p.m. at Riverside Park in Murfreesboro.