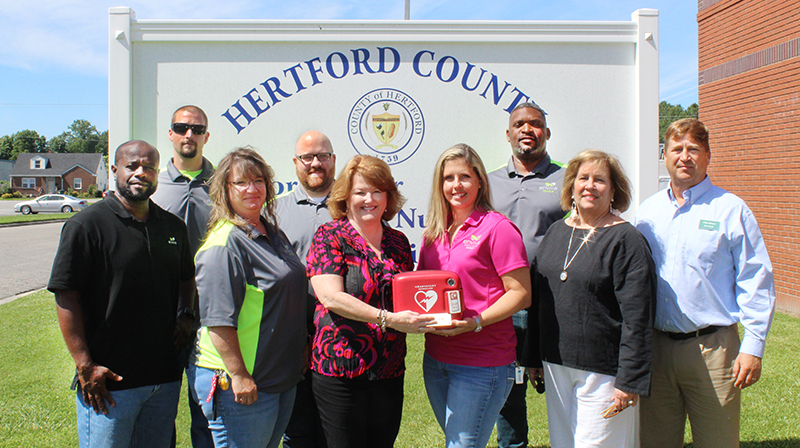 Holding the new AED unit is Hertford County Office of Aging Director Diedra Evans (front center, left) and Enviva’s Shelly Daughtrey (front center, right). They are also joined in the front row by, from left, Charles Steward and Angie Wilson, both of Enviva, and Amy Braswell of the Ahoskie Chamber of Commerce. In the back row, from left, are Enviva representatives Chris Forehand, Mark Lemons, Michael Leary, and Chris Brown. Staff Photo by Holly Taylor

AHOSKIE – Hertford County’s Office of Aging will now be ready with life-saving equipment if a cardiac emergency arises.

Thanks to a sponsorship donation from Enviva, the Office of Aging was able to obtain three automated external defibrillator (AED) units which will be placed at their nutrition sites in Ahoskie, Winton, and Murfreesboro.

Representatives from Enviva’s Ahoskie facility visited the HCOA Ahoskie Nutrition Site on Thursday, June 24 for the AED presentation and to spend some time with local senior citizens.

Shelly Daughtrey, who directs human resources at Ahoskie’s Enviva plant, spoke to the senior group to provide an overview of the wood pellet plant’s operations. The group of Enviva representatives then stayed for a couple rounds of bingo with the seniors as well, with Enviva’s Charles Steward and Michael Leary handling the bingo announcement duties.

“Now that I know you guys are playing bingo over here before lunch, I might have to adjust my lunch break,” joked Daughtrey, who also added, “We really appreciate the opportunity to be with you all this morning.”

HCOA Director Diedra Evans was also in attendance to receive the AED units.

“During the pandemic, we took the opportunity to make sure all of our staff were properly trained on the use of an AED,” Evans explained. “The only problem was we did not have the funds in our budget to acquire the units.”

Amy Braswell, Executive Vice President of Ahoskie’s Chamber of Commerce, was the one who helped bring HCOA and Enviva together to bridge the funding gap.

“Diedra came to me as a friend, and said, ‘we really need these AEDs – it’s a mandate – but we just don’t have the budget to buy them’,” stated Braswell. “So I made a call to another friend, Chris Brown with Enviva. They have been so good to our community, so I thought they might be able to help us out.”

“We are profoundly thankful for this gift,” Braswell concluded.

The AED units are lightweight, portable devices which improve the chances of survival significantly in an emergency situation. A unit is typically employed when a person experiences a disruption in his or her heart’s electrical activity that causes a dangerously fast or irregular heartbeat. Irregular heart rhythms can lead to the heart not pumping effectively or even to stop beating.

“We hope that we never have to use one of these units, but the reality is that we probably will have to at some point,” Evans said. “The beauty of these units is that they provide direct feedback to the person seeking to assist someone in distress. It makes all of the immediate care more effective until the ambulance arrives.”