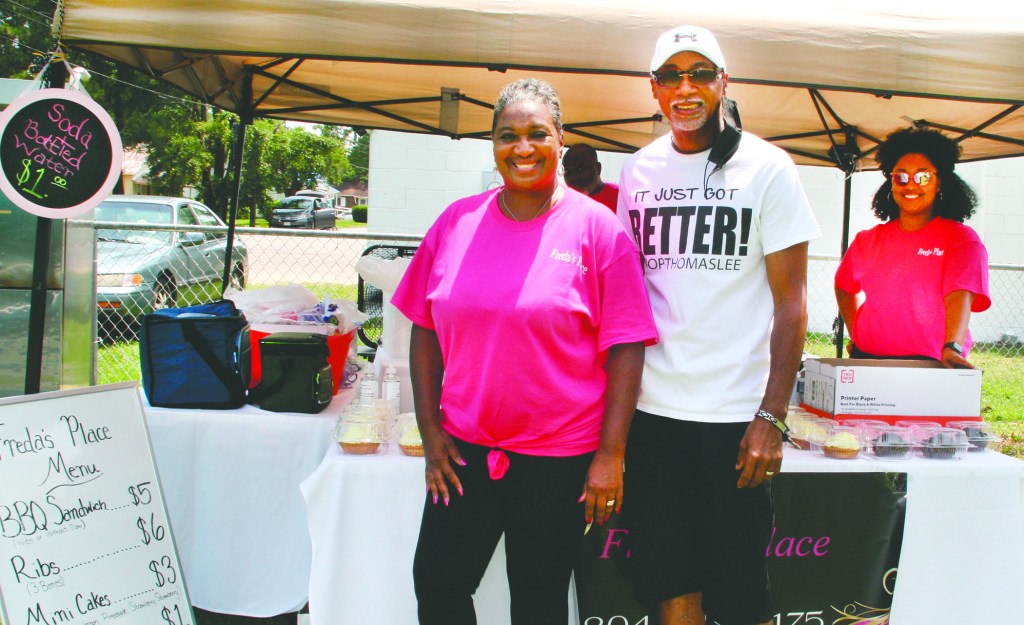 LaWanda Britt Burch is shown with her brother, Henry Britt, who played the trumpet for “Lift Every Voice and Sing” and “Taps” during Saturday’s Juneteenth celebration in Murfreesboro. Photo by Cheryl Deloatch

Speakers led the program on a stage decorated with memorial and Juneteenth wreaths created by Murfreesboro resident Sylvia Anderson, owner of Lamont’s. 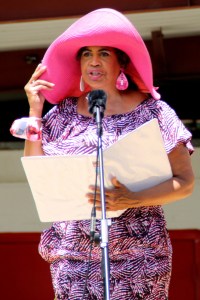 Jackie Ruffin Pittman reads the history of Juneteenth on the main stage. Photo by Cheryl Deloatch

“It is fitting that today’s event is observed on this river park, for so many enslaved people freed themselves on the Meherrin and Chowan rivers,” Jones wrote.

Jones, also a historian, shared relevant information. “…Juneteenth is more about African Americans freeing themselves rather than being freed,” he wrote. “The enslavers forced the United States fort’s commander to surrender. In 1862, United States forces recaptured the Outer Banks, Elizabeth City and Edenton.”

Jones detailed the skirmish leading to Winton’s burning on February 20, 1862.

“That day, February 20 1862, might have been the first day that our local African Americans freed themselves in large numbers and went away with the U.S. troops and the gunboat,” he wrote.

Jones explained starting in May 1863, African Americans living “along and near the Meherrin, Chowan and Roanoke Rivers began enlisting in the United States Army.”

Regiments had over 1,000 soldiers. Members of one regiment, the 36th Regiment, Infantry, United States Colored, had enlisted men from Hertford, Northampton, Bertie and Gates counties.

“You may be descended from the heroes of the 36th and other African American regiment,” Jones wrote. “I hope you will find that out.”

“The regiment’s last act played a major role in Juneteenth,” Jones declared. “In June 1865, they were en route to the Mexican border in Texas during the time of Juneteenth to support patriotic Mexicans invaded by a European-backed force. The 36th Infantry and other African Americans returned to the east coast seven months later and were discharged from the U.S. Army. Enslavement was abolished….” 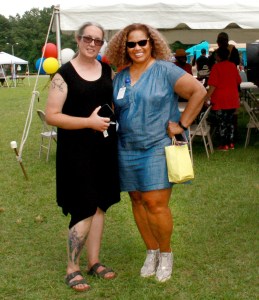 Next, Pittman led a libation and wreath dedication ceremony honoring these men by pouring water from a pitcher over a callalilly while Stephenson read the names of Hertford County’s 36th Regiment USC. Pittman led the group in singing “Funga Alafia,” meaning “welcome, blessings,” and “Ase (pronounced ashay),” meaning “Let it be so.”

Vendors, many with Hertford County connections, were also thanked for their support. Among them were Roanoke-Chowan Community College, G Unique, and Shea Malai Soapery.

Carlton Matthew Stephenson, Jr. was the spokesman for the MHS Class of 1979.

“God inspired us to be responsible for the refreshments for Juneteenth. ‘To whom much is given, much is required.’ My classmates and I wanted to party with a purpose — a chance to give back. My parents taught me to always be a blessing,” Stephenson said

“This event was scheduled before we knew Juneteenth would become a national holiday,” he continued. “We reached out to other classes. Once people heard about Juneteenth, they called to see how to become involved.”

A graduate of A&T State University, Stephenson has been married 35 years with three children and three grandchildren. He is a realtor with Long and Foster Real Estate. A member of New Psalmist Baptist Church in Baltimore, Stephenson is a deacon, trustee and member of the Pastor’s Executive Committee.

“The program was nice – I liked all of it,” said Murfreesboro native Wanda Brimage Williams. “The history was good, and it was good to see everyone.”

Williams’ husband, Melvin Williams, commented, “It is interesting that it happened here and no one knew about it.”