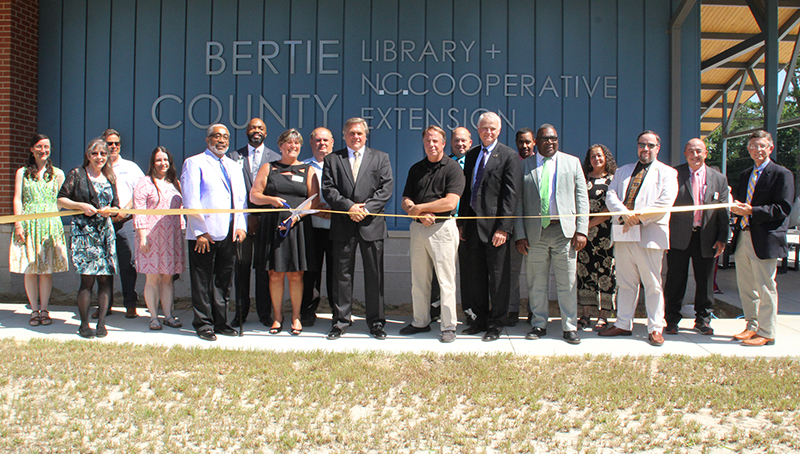 WINDSOR – Nearly five years have passed since back-to-back storms delivered what for many would have been a knockout blow.

However, Bertie County – the scene of numerous natural disasters over the course of several decades – has a knack for bouncing back. 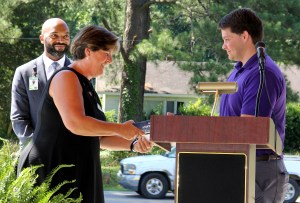 Their latest rebound came here on Wednesday morning where county officials and others formally cut the ribbon to open its new Public Library/Cooperative Extension Service office complex. The dual-purpose building, located on Lancaster Avenue – just off South King Street, replaces two structures in downtown Windsor that were damaged in 2016 by Tropical Storm Julia and Hurricane Matthew.

“We are so happy that this moment, this day has arrived,” stated Tammy Lee, Chair of the Bertie County Board of Commissioners. “We thank all of our partners that got us to this point; the end result is a wonderful addition to our county.”

Commission Vice-Chair John Trent provided a bit of history of why this building was constructed. He noted the major damage inflicted upon the county from Tropical Storm Julia (the week of Sept. 19, 2016) and 13 days later when Hurricane Matthew arrived. Over 30 combined inches of rain fell from those two storms.

“We had residences, businesses, and [county-owned] buildings under water,” Trent said. “We had [public] buildings we had already re-done [from previous flooding events], to include the Cooperative Extension building on Queen Street and Lawrence Memorial Library on Dundee Street. They were all completely ruined again.

“This county came together again under rough times,” he continued. “This building is a testament to the people of Bertie County. From the outset of this project, we wanted it to be different from anything else in our county. We have achieved that with this beautiful building.”

Trent referenced the project as a “new beginning for Bertie County.”

“This is your library, and your Cooperative Extension Center,” Trent remarked. “We thank Golden LEAF for this beautiful building and also for Governor [Roy] Cooper who was a strong influence.” 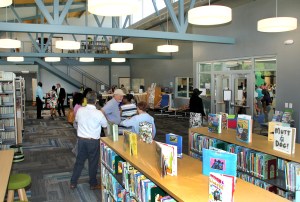 Tours of the new building that serves as the home of the Bertie County Public Library and Cooperative Extension Center were given following Wednesday’s ribbon-cutting ceremony. Staff Photo by Cal Bryant

Scott T. Hamilton, President and CEO of the Golden LEAF Foundation, was on hand to see his organization’s $4.3 million commitment to the project fulfilled.

“Julia came through, knocked ya’ll down and you got back up; then Matthew came through, knocked ya’ll down again, and you got back up,” Hamilton noted. “You showed resilience and that’s what we’re here today to celebrate. We’re honored to have worked with you on this project. Ya’ll have given hope to others that you can get back up after being knocked down.”

Hugh Davis, Executive Director of the Albemarle Regional Library System (which includes Bertie County) and Billy Barrow, Director of the Bertie County Center of NC Cooperative Extension, expressed their appreciation to county officials and Golden LEAF for their combined efforts to make this new facility a reality.

“We feel very fortunate that Bertie County has such capable leadership,” Davis remarked. “Cutting this ribbon today launches a new chapter for this county to serve its citizens. I share your joy over this new building. Our horizon is bright, just as the sun shining on us today. We look forward to sharing this building with the fine folks at Cooperative Extension. We hope this building remains here and dry for a long time to come.”

Barrow noted this marked the third time in seven years that Bertie’s Cooperative Extension office has moved from one location to another.

A special presentation was made by Trey Lewis, Northeast Regional Representative for the Office of U.S. Senator Thom Tillis. He presented Lee with an American Flag that flew over the U.S. Capitol, at the request of Senator Tillis, on behalf of the new Bertie Library and Cooperative Extension Office.

“We see the momentum going on here in Bertie County with this new building,” Lewis said.

During the invocation, Bertie Commissioner Ron Wesson noted that mother served as a librarian in the county for 42 years. He thanked those whose vision for such a facility helped Bertie County build back better in the wake of two powerful storms in 2016.

The Bertie County High School JROTC took part in the ceremony by posting the colors.

Vaughan presided over the ceremony, which included guided tours of the building.

The new homes for the Bertie County Public Library and the Bertie County Center for NC Cooperative Extension are located in this new building, located on Lancaster Avenue off South King Street. Staff Photo by Cal Bryant