LITTLETON, NC – Louise Ricks Barrett, 100, died peacefully in her home on Tuesday, June 15, 2021. She was born to Richard Sidney and Maude Odom Ricks in Branchville, VA and grew up in Severn, NC where she graduated from Severn High School in 1938. Years later she attended Insurance School at UNC Chapel Hill. 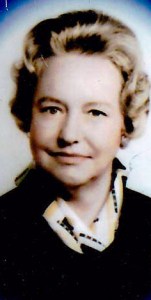 Louise married Braxton Earl Barrett in 1942 and moved to Littleton in 1946. She lived in Littleton for a total of 56 years. While there she worked as a bookkeeper for King Feed & Grocery Company and later as an Insurance Agent for the A.M. Newsom Insurance Agency. In 1968, Louise and Earl moved to Murfreesboro, NC where she worked as Secretary in the Fine Arts Department of Chowan College. She retired in 1985 and returned to Littleton in 1987.

She joined the Littleton Baptist Church in 1952 where she sang in the choir, was a Sunday School teacher and was the assistant pianist for Sunday School opening and closing assemblies.

A Celebration of Life and Remembrance will be led by the Revs. David Little and Michael O. Currin at 2:00 p.m. on Sunday, June 20 at Littleton Baptist Church with interment to follow at Buckhorn Baptist Church in Como, NC.

The family will receive friends from 7-9 p.m. on Saturday, June 19 at Blaylock Funeral Home in Littleton.

Online condolences may be made at blaylockfh.com.