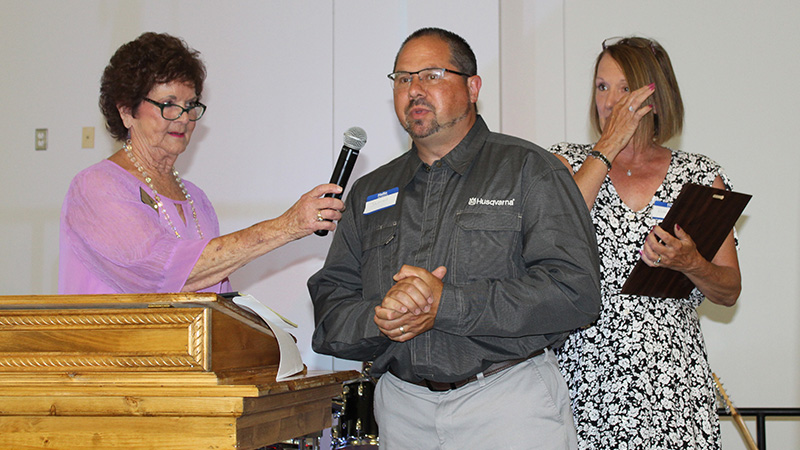 Little’s Small Engines of Conway, owned by James and Patricia Powers, was named as the Small Business of the Year at the Northampton County Chamber of Commerce banquet held June 10. Judy Collier (left), the Chamber’s Executive Director, presented the award. Staff Photo by Holly Taylor

JACKSON – After a year off because of the pandemic, the annual Northampton County Chamber of Commerce banquet was back again this year to celebrate local businesses and the people who keep them running. 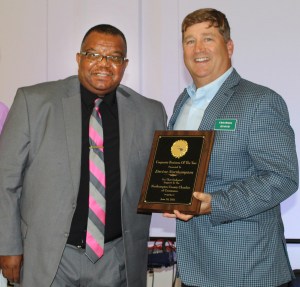 The event, held on Thursday, June 10 at the Northampton County Cultural and Wellness Center, brought together a variety of business leaders, elected officials, and other local supporters. Attendees were treated to a catered meal, entertainment, door prizes, and a presentation by guest speaker Debbie Manning.

Collier also recognized several businesses as new members of the Chamber, and noted how business has remained strong locally despite the challenges of the COVID-19 pandemic.

Entertainment for the event was provided by Deion Warren and New Band on the Block. Warren, who was born and raised in Conway, was a competitor on the most recent season of The Voice on NBC. He and his band performed several songs for the crowd, including covers of Aretha Franklin’s “Rock Steady” and Prince’s “Purple Rain.” 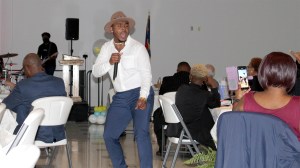 Conway native Deion Warren interacts with the audience as he and the New Band on the Block provided the entertainment at last week’s Northampton County Chamber of Commerce banquet held in Jackson. Staff Photo by Holly Taylor

Manning, founder of National Center for Missing and Endangered, Inc. (NCME), was the keynote speaker for Thursday’s event. She was originally scheduled to speak at the 2020 Chamber banquet until it was canceled due to pandemic precautions.

Manning spent several years as a registered nurse, but a few years ago she decided to switch gears to focus on helping find missing people.

“Advocating for missing persons is very similar to advocating for your patients and their families,” she explained.

Inspired by the National Center for Missing and Exploited Children, Manning started NCME as a way to focus on finding missing people over the age of 18.

“There needs to be a center for everybody,” she said.

She coordinates the organization’s Facebook page from her home in Jackson, sharing information about cases all across the country. Additionally, NCME works with law enforcement on search operations, helps pay for DNA identifications, and ensures that missing cases are entered fully into national databases. All of this work is able to be done through donations.

Manning’s desire to help solve missing persons cases stems partly from an experience during her own childhood. At seven years old, she was almost abducted by a stranger on the street while she was walking home with friends. The attempt was unsuccessful. 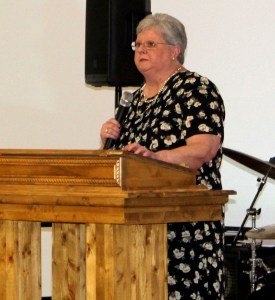 Debbie Manning of Jackson, Manning, founder of the National Center for Missing and Endangered, served as the featured speaker at the Chamber banquet. Staff Photo by Holly Taylor

Her parents contacted the police afterwards, and several weeks later the man was arrested for having abducted and killed two victims. Manning later testified at his trial.

The incident left a lasting impact on her, driving her to continue the work she does today.

Manning’s work with NCME earned her the “2020 Everyday Hero – Inspire a Difference” award from the Discovery ID channel last year.

“I bring that home to Northampton County proudly,” she explained.

Northampton County still has a few missing people who have not yet been found, and some remains which have never been identified. Manning said they’ve tried to help law enforcement whenever possible, including making sure those cases were entered into the NamUs database.

Manning concluded her presentation by thanking law enforcement for the work they do. And she also stated that she was proud to tell people all over the country that she represents Northampton County.