Nucor to the ‘rescue’ 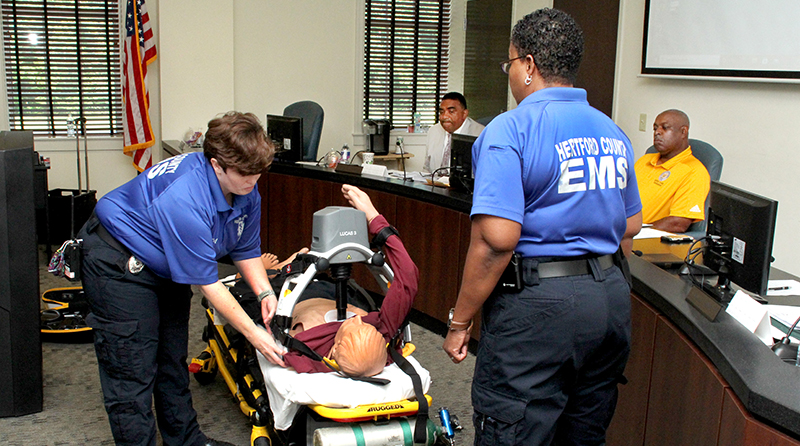 WINTON – Thanks to the generosity of Hertford County’s largest employer, the medical well-being of local citizens has taken a turn towards automation.

At their meeting here June 7, the Hertford County Board of Commissioners were treated to a demonstration of a lifesaving device donated to the county by Nucor Steel.

James Broglin, the county’s EMS Director, said the device is capable of performing CPR (Cardiopulmonary Resuscitation) automatically instead of an EMT having to perform chest compressions manually. 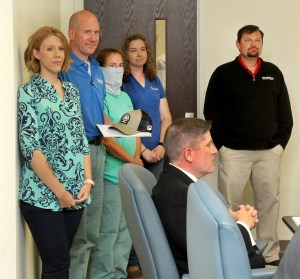 With the manual compressions, Broglin said it’s recommended that EMTs performing the strenuous activity switch out every two minutes.

“That’s impossible when a patient is being transported as there are only two EMTs onboard, one in the back with the patient and the other driving the vehicle,” Broglin stated. “With the LUCAS machine, that frees up our EMTs to provide other lifesaving aid.”

He and Hertford County EMTs Tina Bazemore and Megan Brown performed a demonstration of the device for the commissioners.

“With this portable unit, the chest compressions continue uninterrupted, starting with our initial point of contact with the patient and then as they are taken on a stretcher to the ambulance….all the way to the medical facility,” Broglin remarked.

“The machine doesn’t tire-out [as a human would performing CPR manually],” he added. “This is truly a device capable of saving lives and easing the physical strain on an EMT.”

Broglin expressed his thanks to Nucor for their generosity, adding that within two weeks of the company approving the donation, the lifesaving device was delivered to Hertford County EMS.

“This device doesn’t just support our team at Nucor, but everyone across Hertford County,” said Vaughan. “That’s what we want to do at Nucor…reach out to the local community and be a part of this community as many of us also live in this county.”

Later in the day, during their budget workshop, the Hertford County Commissioners, still impressed by the LUCAS demonstration, recognized the need to equip more of the county’s ambulances with those devices. The commissioners directed the county manager to amend the pending FY 2021-22 budget to provide funding for the purchase of two additional LUCAS devices.