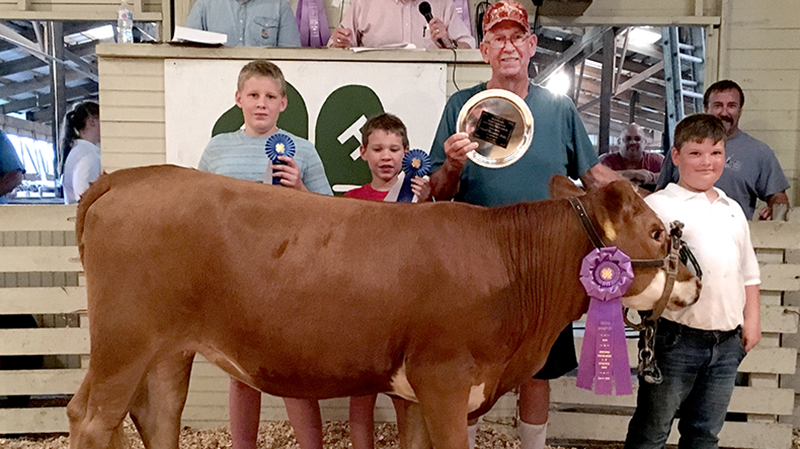 This heifer shown by Winn Lane (right) was crowned as the Grand Champion at Wednesday’s 4-H Livestock Show and Sale. The winner is pictured with representatives from Cross Roads Fuels who purchased the animal. Contributed Photo

MURFREESBORO – Like many events last year, the annual 4-H Livestock Show and Sale in 2020 was canceled because of the COVID-19 pandemic.

But now that conditions are starting to improve, participants were back again this year, showing off the animals they raised over the past several months in the hopes of earning the title of “champion.” 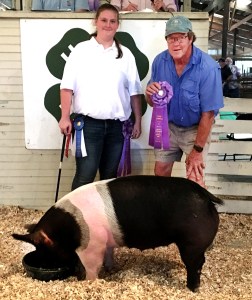 Emalee Jones entered the hog competition and her animal was judged as the Grand Champion. She is shown with a representative from Producers Gin, who was the highest bidder for the hog at the auction. Contributed Photo

More than 25 participants, ranging in age from 9 to 18 years old, competed in showmanship and market categories at the show on Wednesday, June 9. In addition to the competitive categories, children aged 5 to 8 years old had the opportunity to participate in the noncompetitive “cloverbud” category.

The event, which is held each year at the 4-H Livestock Arena in Murfreesboro, is a joint effort coordinated by the Cooperative Extension offices of Northampton, Hertford, and Bertie counties.

The 4-H’ers brought a variety of livestock, including goats, lambs, hogs, and cattle. In the showmanship category, participants are judged on how well they handle and know the animal they raised. Livestock in the market class are divided into weight categories and are judged based on muscular development, finish, structure, size, and carcass qualities. 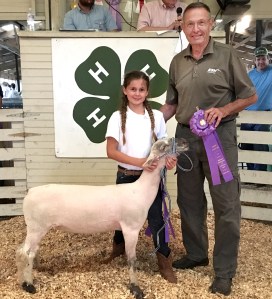 During the lamb competition, this entry from Morgan Myers was selected as Grand Champion. A representative of Hertford Farm Bureau is also pictured after submitting the winning bid for the lamb. Contributed Photo

A grand champion and reserve champion for each livestock category are named from the market class division.

Matthew Morrison served as the judge for this year’s event. He is currently a coordinator with the NC State University livestock judging team as well as the coordinator for the E. Carroll Joyner Beef Education Unit.

The top winners in each market category were as follows: 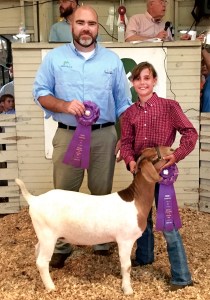 In the goat market class, Jessa Pope’s entry was judged as the Grand Champion. She is pictured with a representative from Montague Farms, who purchased the goat at the auction. Contributed Photo

Despite a few stubborn and lively animals, there were plenty of smiles from the participants as they competed in their categories.

Following the livestock show, the event concluded with a dinner and then an auction of the grand and reserve champion animals. Parker Phillips served as the auctioneer, a job he’s been conducting for the 4-H event since its beginnings 39 years ago.

“The livestock show and sale is a great opportunity for the children to demonstrate all the knowledge and skills they acquired by working through the 4-H program to the communities they live in,” said Northampton County Livestock Agent Brandon Pike after the event. “The children are also able to have a fun experience while showing their animals.”