GATESVILLE – Timothy (“Tim”) L. Wilson didn’t roll his eyes in distain upon learning that the area where he was interviewing for a management position only had a single stoplight.

Nope….that fact never bothered Wilson as his roots can be traced to sparsely populated western North Carolina and, later as a child, to the rural peninsula north of Newport News, VA. 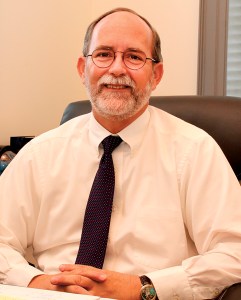 Tim Wilson began his new duties as Gates County Manager on May 3 after spending the majority of his local government management career in Virginia. Staff Photo by Cal Bryant

Wilson, hired in late March as the new Manager of Gates County local government, stressed that he has always enjoyed living and working in rural areas.

“When I move I deliberately look for a rural location,” he noted. “I enjoy that pace, that lifestyle. I’m also an outdoors type of person, so a rural area is also attractive in that sense.”

The move to Gates County also puts him close to family and friends in Newport News and Chesapeake.

He sees rural development as a “blank palette” that is open to multiple opportunities.

“And with that comes a chance to decide exactly what you want, how you want it, and where you want it to go,” Wilson observed.

At age 58, Wilson is a 33-year veteran in local government, beginning his career in 1988 after earning a college degree in economics.

“After college, I didn’t think about a job in local government; I was thinking more along the lines of working in the private sector, but that worked out differently than I had planned,” said Wilson.

His first job out of college was a regional economic development planner in Virginia. There he worked with local government officials from several counties and cities.

“I got introduced to comprehensive planning and land use and development,” Wilson recalled. “I found that work very appealing by being able to help shape and improve the communities there. It was a good feeling to know that I was able to help local government officials make informed decisions.”

He spent his first four years at that job before moving to Brunswick County, VA in 1992 to become their planner, a first for the local government there.

“They were looking at adopting zoning, and putting together an economic development program,” he said of his first management position.

He put together land use ordinances, zoning ordinances, and even helped the county launch its E-911 system.

“Their [governing board] gave me clear direction of what they wanted to accomplish and left it to me to devise a plan,” Wilson said.

Wilson has worked in management positions for local government entities since that time, to include an eight-year stint as Director of Planning and Development for the Town of Nags Head.

His style of management was developed from those he’s worked with along his career path.

“Yes, I borrowed some [management styles], but the best way to develop your own style is two-fold: one, learning from your own mistakes; and, two: from observing the management styles of others that turned out to be ineffective….you remember that and decide that’s not going to be how I am.”

Wilson added that his “learning curve” within local government has also included the legal aspect.

“I’ve worked with some very good, very experienced attorneys who gave me a real appreciation for the law and how to equally and fairly apply those general statutes,” he stressed. “It has helped me to become very objective and not make knee jerk decisions; rather hear both sides of the story and use the evidence, not the emotion, to make sound decisions.”

Wilson said he understands he works within a political environment.

“It’s important to understand that political landscape, but as a manager I can’t become part of that landscape,” he stated.

During the interview process, Wilson said he learned that Gates County was looking to become proactive in economic development.

“My background fits well with that,” Wilson stated.

How does Gates County need to position itself within economic development?

“It’s close to an urban area, so we can assume there will be population growth as more and more people discover this county, but we want to become more, much more, than a bedroom community,” Wilson stressed. “There needs to be commercial growth to balance the residential growth.

“But you also need to protect and keep what you already have,” he continued. “Use your natural assets and attributes and don’t try to become something you’re not. You don’t want to destroy the reason why people see Gates County as appealing. You want to allow growth, but it needs to be controlled growth in the right places.”

If that growth does come, Wilson said it presents a double-edged sword.

“We would have to expand county services, which increases the costs of providing those services,” he noted. “If that happens, there are only two options to fund that, you either expand the tax base or increase the tax rate.

“On the flip side of that, economic development helps meet the basic needs of our citizens,” Wilson added. “They won’t have to spend the extra time and money to travel to purchase life’s necessities. That also creates local jobs and keeps sales tax dollars here at home. It’s a winning proposition for the citizens and for local government.”

He also sees the importance of having an excellent public school system as an ally for economic development.

“I’ve heard about the great school system here,” Wilson said. “I know how important that is. I’ve been a county administrator where that was the polar opposite because none of the schools were accredited. It had a negative impact. People didn’t want to move there; businesses didn’t want to locate there. I appreciate that Gates County has a great educational system already in place. It’s an asset to help develop this county.”

In closing, Wilson emphasized that he didn’t take the Gates County manager’s job in an effort to position himself for the next step in his career.

“I told the board [county commissioners] that I believe I’m a good fit and looking for a place to stay until I’m ready to retire. Gates County checked all the boxes for me and I’m ready to put my experience to work here,” he said.

Wilson, who started his new job on May 3, holds a Bachelor of Arts degree from Christopher Newport University. He completed additional studies at Virginia Commonwealth University in Legal and Legislative Foundations of Planning and successfully completed the Virginia Certified Board of Zoning Appeals Program as well as Virginia Planning Commissioners Program.

His wife Sharon is a graduate of Christopher Newport University and is a professional social worker. They have two adult daughters, Rebecca, a graduate of East Carolina University, and Sarah, a graduate of UNC Pembroke, and three grandchildren, Robby, Rachel, and Ryleigh