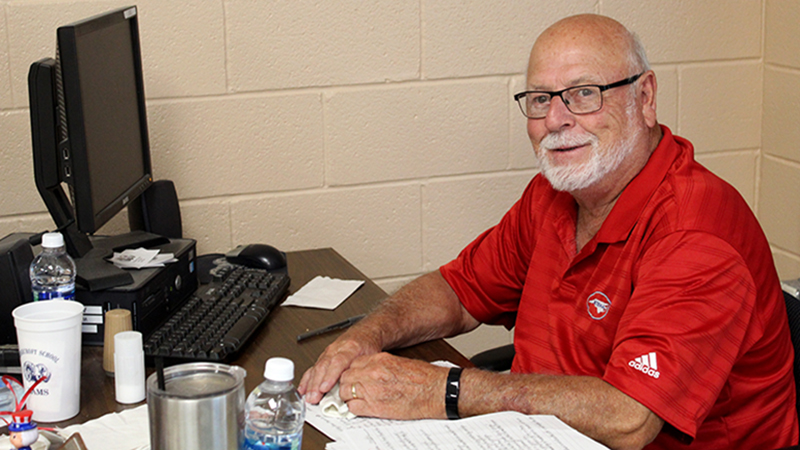 Over the course of his long career in the classroom, Doug Cobbs has taught a variety of subjects, to include driver’s education, health/physical education, and several different history courses. His last day at Ridgecroft School was Wednesday, June 2. Staff Photo by Holly Taylor

AHOSKIE – Ridgecroft School has had hundreds of students walk up and down its halls over the past few decades, and a good majority of those have had Doug Cobbs as their teacher at least once.

But after 50 years of teaching—the last 36 of which were at Ridgecroft—Cobbs is putting away his grade book for the last time and retiring from the classroom.

“It’s tough walking away, but I think it’s time for me to move on,” Cobbs said in an interview on June 2, the last day of the school year for Ridgecroft’s students. “I enjoy what I’m doing. I enjoy being around the kids. But the time has come for me to look out for me.”

Throughout his teaching career, Cobbs has taught a variety of subjects, ranging from driver’s education and first aid to health/physical education and several different history courses.

“I’ve been a history teacher for the last 10 years,” he said, adding that US history was probably his favorite subject to teach.

“I forget sometimes these kids that are here now were not even born on 9/11, so I go over that pretty stringent with them,” he continued. “So they can actually know what happened and why we do the things we do now.”

In his classes, Cobbs said he emphasized learning history instead of merely memorizing it. Getting the students to understand the importance of learning over memorization is one of the most challenging parts about teaching, he said.

The challenges of teaching, however, have also been rewarding over the years. Cobbs said the most fun part of the job has been interacting with his students.

“It’s not about me. It’s all about them. It’s trying to get them to where they want to learn,” he explained.

Looking back at five decades of teaching, Cobbs said the students are what has changed the most about the job.

“They’re more computer literate. They can run circles around me when it comes to working on a computer or using a cell phone,” he admitted. “As a teacher, I think you have to change with them. Everything does not stay the same.”

Cobbs, who is a native of Richmond, VA, began his teaching career in 1971 after his graduation from Virginia Commonwealth University. He taught at Frederick Military Academy in Portsmouth, VA until the school closed. After that, he visited Ridgecroft for a job interview, and the rest is history, as the saying goes.

“I’ve only had two teaching jobs in 50 years. Either I’m doing something right or somebody doesn’t want to get rid of me,” he said with a laugh, but added on a more serious note, “Being here has been a blessing to me and my wife and kids.”

In addition to teaching, Cobbs served 30 years as a coach and athletic director at Ridgecroft, stepping away from that position in 2015. He’s been affectionately called “Coach Cobbs” for years by all his students, whether or not they actually played on one of his teams.

His prolific coaching career spanned several different sports, including basketball, softball, soccer, and more. He led the school’s softball team to a state championship in 1993, and his girls’ basketball team in 2008 finished as the runner-up in the state tournament. In 2016, he was inducted into the NC Independent Schools Athletic Association Hall of Fame.

With retirement on the horizon, Cobbs said he and his wife plan to do some traveling and just enjoy life for a while. And maybe he might swing by Ridgecroft every now and then to see how things are going.

When asked what would be some final words he’d want to share with all his students, Cobbs was quick to say “don’t take things for granted” and to work hard.

“If you don’t make the effort, you’re not going to be successful. I don’t know how you measure success, but when you’re self-satisfied, I think that you are a successful person,” he continued. “And I hope that’s what these children grow up to be, successful people and an asset to society.”

“I just hope the best for all of them, and I hope I’ve helped instill some of that in them,” he concluded.

When the next school year begins, the halls of Ridgecroft School will be a little bit quieter without Coach Cobbs. He’ll be enjoying a well-earned retirement. But his lessons and values will continue on through all the students he taught these past 50 years.