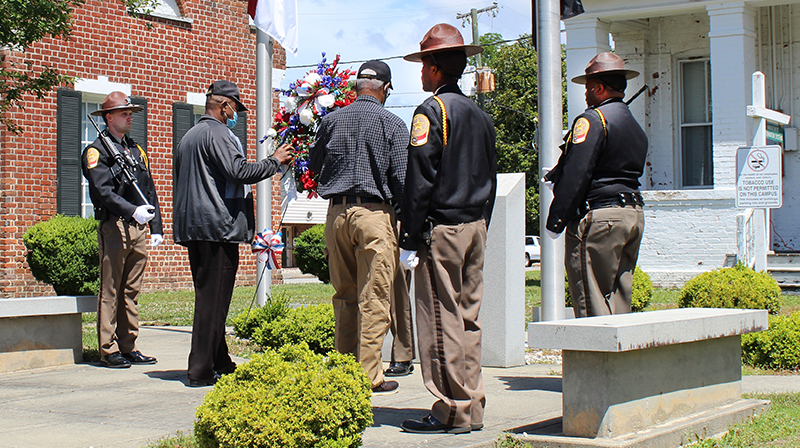 Flanked by the Northampton County Sheriff’s Office Honor Guard, retired Army veterans Edmond Moody and Joseph Mitchell place a wreath at the base of the flagpoles adjacent to the county courthouse. Staff Photo by Holly Taylor

JACKSON – In front of the steps of the Northampton County courthouse in Jackson, a small crowd gathered here Monday for the annual Memorial Day ceremony to remember servicemen and women who have made the “ultimate sacrifice” for their country.

After an opening prayer by Rev. Franklin D. Williams and a performance of the national anthem by Pam Brett, veterans in attendance were recognized for their service. They represented all branches of the military, including Army, Navy, Air Force, Marines, and Coast Guard. Many were veterans from the Vietnam War, while others served during different conflicts or during peacetime. One veteran in attendance served during World War II.

The guest speaker was retired Conway Police Chief Billy Duke, who also previously served in the US Army. 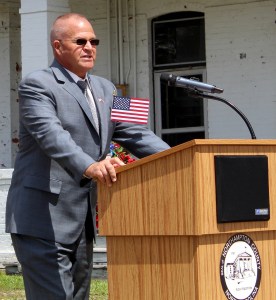 “That training I received in the military was probably some of the best training that I can ever remember. That gave me a good foundation to come back and start my career in civilian law enforcement,” Duke explained.

With the backdrop of the flags flying at half staff behind him, Duke focused much of his speech on why Memorial Day is an important holiday to observe.

“Memorial Day is an opportunity for Americans to pay homage to those who died serving our nation, and to acknowledge the immense debt that we own to them and their families they left behind,” he said. “Today we honor those Americans who sacrifice their lives for freedoms we hold near and dear today.”

Duke also shared a quote from President Franklin D. Roosevelt that summed up the sentiments of the day: “Those who have long enjoyed such privileges as we enjoy forget in time that men have died to win them.”

He went on to list statistics of how many American military members have died in conflicts as far back as the Revolutionary War, and he also urged people to remember those who continue to serve in the military today.

“Although Memorial Day is known as a time for remembrance, it is also a time for us in uniform to reaffirm our own commitment to selfless service. By doing so, we not only honor the memory of those before us, but also vow to carry on the legacy of excellence in the world’s best military force,” he concluded. “We thank you for your service, hard work, and dedication.”

The ceremonial laying of the wreath followed Duke’s speech. The crowd watched in reverent silence as retired Army veterans Edmond Moody and Joseph Mitchell, along with assistance from the Northampton County Sheriff’s Office Honor Guard, placed the wreath in front of the flag pole.

The event closed with brief remarks from Stanley Edwards, who is retired from the Navy and currently serves as the Chair of the Northampton County Veterans Advocacy Commission. He explained that the commission’s goal is to get in touch with all the veterans in the county, so that the group may be able to provide any support they need.