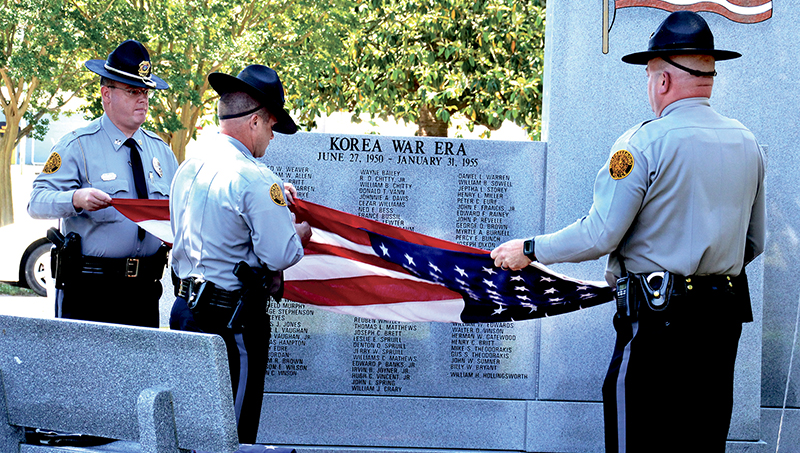 MURFREESBORO – Memorial Day is set aside to remember and pay respect to those men and women in military uniform that lost their lives while serving to protect America’s freedom.

Murfreesboro Mayor Hal Thomas did exactly that here Monday morning as the town held its first in-person Memorial Day ceremony since 2019. Last year’s traditional public event was canceled due to the COVID-19 pandemic. 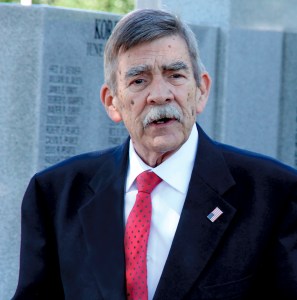 Thomas, who served in the U.S. Air Force, retiring as a Master Sergeant, served as the speaker at Monday’s event, held adjacent to the Murfreesboro Veterans Memorial located on the grounds of the town’s Municipal Building. There, Thomas paid his respect to all those who have fallen in combat, but told the stories of three fallen heroes. The first was Private John Kelly, the brother of his mother-in-law. Thomas said Kelly joined the military at age 19 during World War II.

“He was planning on getting married and working his father’s farm,” Thomas said of Kelly. “But the Moore County Draft Board called him to serve. He felt it was his duty and he answered the call. He was killed in combat in France only three months before the end of war.”

Kelly is buried behind Union Presbyterian Church in Moore County.

“He did his duty; he served our country in time of war and is a fallen hero,” Thomas added.

The Mayor then told the story of David Parker, a childhood friend and schoolmate.

“When David graduated high school, he joined the Army and was sent to Vietnam; he felt the need to answer the call and serve his country,” Thomas recalled. “In 1966 he was declared Missing in Action. In 1973 he was declared Killed in Action. There was no body found, but that did offer some closure to the family.

“David is a fallen hero; he volunteered for service as that what he felt he needed to do,” Thomas added.

The third fallen hero is someone Thomas never had the pleasure to meet. Jarvis Outland, a 1937 graduate of Murfreesboro High School, enlisted in the U.S. Navy in Norfolk, VA on July 5, 1938. He reported for duty that same year onboard the USS Oklahoma.

“He died on Dec. 7, 1941 when that ship was among those attacked and sunk by the Japanese at Pearl Harbor,” Thomas said.

Four hundred twenty nine crewmen on the Oklahoma lost their lives that day, to include Outland.

In the weeks and months following this wartime disaster, Outland’s body was listed as “non-recoverable” by the U.S. Navy. That all changed beginning in 2015 when the U.S. Department of Defense issued a directive to identify those unknown heroes. In most all cases, DNA was used in that effort.

“They were able to pinpoint surviving family members and obtained DNA samples from his mother’s and father’s family and positively identified his remains,” Thomas said. “We had a nice celebration of his life when the Navy brought his remains home [Nov. 3, 2018)] for burial right down the street here at Riverside Cemetery.”

Earlier in his remarks, Thomas spoke of the late John A. Logan, who fought in the Mexican-American War and then served as a General for the Union Army in the Civil War. Thomas said in 1866, General Logan, who headed up a Civil War veterans group at that time, declared May 30 as Decoration Day. He encouraged citizens to take off from work and use that time to decorate the graves of those who had died in combat.

“Let no neglect nor ravages of time testify to the present or to the coming generations that we have forgotten, as a people, the cost of a free republic,” said Thomas, quoting Gen. Logan.

In 1971, Congress made Memorial Day a national holiday, always observed on the last Monday of May.

“Today, we are going to do what General Logan said, to honor those who gave so much so we can enjoy our freedom,” Thomas noted.

The Mayor then turned the ceremony over to Murfreesboro Police Chief David Griffith, Captain J.E. Dilday, and Sgt. B.D. Johnson. That trio lowered the town’s ceremonial U.S. Flag over the Veterans Memorial, one that flew over the U.S. Capitol on March 1, 2007 and was presented to the Town of Murfreesboro by U.S. Senator Elizabeth Dole. It was raised for the first time locally that same year during the town’s Memorial Day service. It is only used for special occasions. The reminder of the time it is properly folded and kept in a display case inside the Town Hall.

Afterwards, Thomas was joined by Chief Griffith as they placed a wreath of red, white and blue flowers in front of the Veterans Memorial. That wreath was donated to the town by members of the Murfreesboro Coffee Club.