AHOSKIE – While plenty about Signing Day for high school athletes changed due to the pandemic, Hertford County High kept things as normal as possible Tuesday as three former Bears football players committed to play football at the next level.

Extended family was still on hand, along with the coach and school administrators, but the usual gaggle of former teammates, friends, and classmates missed out on the once-in-a-lifetime occasion due to still-in-place restrictions. 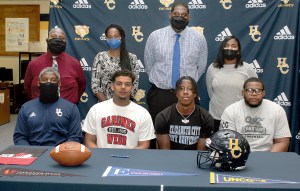 But that didn’t stop the joy of what the day represented: sit at a table in front of a school backdrop, sign, pose for pictures with a select few people present, then exit back to class.

Saxby and Jacobs will attend college on academic scholarships while Pitt joins his brother on the Vikings squad with preferred walk-on status.

“I want to be the most diverse player I can be at my position whether on offense or defense,” said the six-foot 290-pound Jacobs, who began and ended his career with the Bears. It was a prep career sandwiched between his sophomore and junior seasons playing at Northampton County High where he participated in the 2019 1A State Championship game.

“I wanted to play in Greensboro,” said the future Spartan. “I just didn’t want to play at (North Carolina) A&T. I want to bring speed and power to my game at the next level and be able to focus on football.”

Jacobs chose Greensboro over Methodist, Ferrum, and NC Wesleyan, among others. He plans to double-major in Computer Science and Finance.

Elizabeth City State is getting a prototype tall receiver in 6’2” 205-pound Kyree Pitt, who has followed his older brother Ja’Ree – another former HCHS player who was a running back for the Vikings – onto the field at Roebuck Stadium.

“I’m going to work hard,” Pitt said, while revealing he plans to major in kinesiology. “I know moving up to the college level means I’m going up against better players. But if I work hard, I’ll do a good job.”

“I hope we can line up across from each other,” Pitt noted with a sly grin. “But bring on the competition, and may the best man win.”

As a senior Pitt averaged over 31 yards per game and hauled in three touchdowns in the shortened six-game season. He finished with 348 total receiving yards, or about 19.3 yards per catch according to MaxPreps North Carolina.

Speaking of MaxPreps, quarterback Tye Saxby re-wrote the Bear record books despite the shortened spring season. He finished his illustrious career as the school’s all-time passing leader with 6,154 yards through the air and 70 touchdowns, while rushing for eight more scores. His 58 percent passing rating (404 out of 693), while tossing just 17 interceptions – most of them as a sophomore – earned him a nod to play in this summer’s East-West All-Star game in Greensboro come July.

“I liked Gardner-Webb because it wasn’t too big and it wasn’t too small,” the lefty gunslinger acknowledged. They’re giving me a chance to do what I love to do.”

After having received looks from coaches and scouts as a junior from the likes of East Carolina, NC State, UNC-Charlotte, and having attended Wake Forest’s summer football camp, Saxby may have been headed to a Power-5 program. He admits because of the pandemic and the spring high school season, his recruitment slowed and he thinks that may have hurt his chances.

“Yes, I think I could have been FBS (Football Bowl Series),” he maintained. “It still boils down to the mentality, the leadership, and the work ethic you bring to succeed.”

The future Computer Science major also continues to set his marks and goals high. A pocket-passer mostly in high school, Saxby says while he hopes he won’t have to run much in college but admits he won’t shy away from the contact.

“When I finish college I hope to have a job, maybe do some coaching (he’s the son of a coach), or maybe even the NFL,” he stated without skipping a beat.

His father, Bears head football coach Terrance Saxby, also thinks the extra year of eligibility that the NCAA granted college players meant tightened roster spots that might not have worked in Tye’s favor.

“It marked a strange summer last year,” the elder Saxby confessed. “There were no camps and no chance for kids to showcase their talents before (college) coaches.”

As he sends his son off to the next level, the coach says he has no reservations about how his skills will be enhanced and improved at the next level.

“This will be the first time he’s been coached by someone other than me,” his father noted with a laugh. “I’ve coached him since Pop Warner Youth Football, assisted with his Middle School development, and then had I him for four years here at the high school. It’ll be different, but I think he’ll be fine.”

Fast track to the top