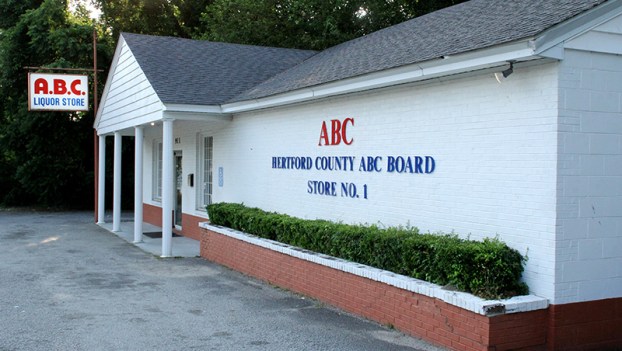 The Hertford County ABC Board has approved a bid to build a new store in Murfreesboro, replacing this one that is 40-plus years-old and located at 911 East Main Street. Staff Photo by Cal Bryant

WINTON – Armed with the blessing of their appointing agency, the Hertford County ABC Board can now officially move forward with building a new store in Murfreesboro.

The Hertford County Board of Commissioners, at their scheduled meeting here Monday evening, gave their endorsement to the half-million-dollar project.

The project has been on the drawing board since 2018.

Clarence M. Jordan, General Manager of the Hertford County ABC Board, told the commissioners of the reasons behind building that new store.

“Although the store in Murfreesboro is profitable, it’s only 1,500 square feet and in a building that’s over 40 years-old with very limited parking,” Jordan acknowledged.

“It’s a counter operation, meaning that customers have to stop at the counter to make their purchases through a one-inch thick bullet-proof glass,” he noted. “It’s an outdated store. The customers can’t see clearly want they want [on the shelves behind the counter]. There’s no such thing as impulse shopping at that store.”

By comparison, the new store will provide nearly double the space (2,515 square feet) and will feature “open service” shopping, meaning customers can walk up to the shelves and browse the selections.

The new store will be constructed at 912-B West Main Street, in the general area of Food Lion.

The Hertford County ABC Board opened project construction bids on May 11. R&L Builders & Sons LLC of Battleboro was awarded the contract after submitting the lowest bid at $523,885. The ABC Board also has a $29,693.28 bid in hand from Display Options, Inc. of Charlotte for the shelving at the new store. That brings the total price of the project to $553,578.28.

Jordan said the ABC Board will finance the project with a $600,000 loan from Southern Bank. The loan will be for 20 years with a 2.5 percent interest rate. Repayment will be monthly at $3,179.42 each.

“Based on the current profits at the Murfreesboro store, that’s a manageable amount to pay per month,” Jordan said. “The difference [between the total price and the loan amount] will be for any unexpected expenses that may be incurred,” he added.

Board of Commissioners Chairman Ronald Gatling inquired of the role, if any, that he and his colleagues must take on this issue.

“This is an ABC Board decision,” answered Murfreesboro attorney Charles “Chuck” Revelle who serves as legal counsel to the commissioners. “They don’t have to have the permission of the county commissioners to do this, but it’s always good on their behalf to keep the commissioners advised of what’s going on.”

Revelle went on to cite a North Carolina General Statue that permits an ABC Board to borrow money “only to purchase for building, equipment, and stock.”

Revelle did remind the commissioners that a portion of the profits made from the controlled sale of alcohol do wind up in the hands of the county.

The Commissioners, on a motion, did approve an “endorsement” of the ABC Board’s plans.

The new store will be constructed on a 1.08-acre plot located on West Main Street between the Dollar General and Graham Hydraulics. That lot was purchased by the Hertford County ABC Board following a public hearing and subsequent approval by the Murfreesboro Town Council at their meeting on May 9, 2018.

That same year, at the July meeting of the Murfreesboro Council, numerous individuals showed up, many from local churches, to express their opposition to building the new ABC store in that particular location, which is across the street from Mt. Sinai Church of God. Seven people spoke during the public comment period of that meeting, one of which referencing a petition, signed by nearly 1,000 individuals, in opposition of the ABC Board’s plans.

It was noted at the meeting that the ABC Board’s plans do not violate any minimum distance requirements by law.