GATESVILLE – Over the course of his adult life, Frank Speight Rountree promoted the importance of donating blood. It wasn’t until the latter stages of his life that he found himself on the receiving end of that needle.

Rountree passed away on New Year’s Day, 2021 from acute myeloid leukemia. He was diagnosed in December 2019 with myelodysplastic syndrome (MDS), a rare type of blood cancer. Since his body no longer made healthy blood cells, he needed frequent transfusions of whole blood and platelets. 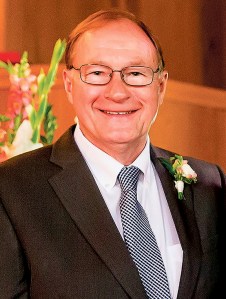 “He donated many gallons of blood throughout his life,” said his widow, Jane Rountree of Gatesville. “After he was diagnosed with MDS he found himself on the other side, needing blood transfusions, and realized the importance of each person giving to others.”

Now, with another Red Cross blood drive coming to Gates County on Wednesday, May 19 from 12:30-6:30 p.m. at the Central Middle School gym, Mrs. Rountree stressed the importance of being a donor. The upcoming drive, sponsored by the Gates County Lions Club, is being held in memory of her late husband.

“If Frank was still with us, he would ask you please give blood,” she noted.

Born Feb. 25, 1945 in the office of a local doctor, Rountree lived in Gates County his entire life except for attending ODU in Norfolk.

Raised on a farm, he learned to work hard and help with chores. He especially liked the nearby creeks, the Chowan River, and all boats.

“He really loved his family,” said Mrs. Rountree of her husband of 47 years, which witnessed the birth of a daughter and a son along with five grandchildren (plus one from two months ago).

Mr. Rountree was a guidance counselor at Gates County High School and later became the coordinator of workforce development for the school system, retiring in 2001 after 31 years.

“He was instrumental in recruiting high school students to donate blood by walking to the Gates County Community Center during school hours,” said Jane Rountree. “One former student said she wasn’t sure whether she could donate, but she certainly wanted to get out of class.

“His dear friend, Marty Taylor, led the blood drives during that time and the donations increased because of the great efforts from high school students,” she added.

Frank Rountree was a former member of Middle Swamp Baptist Church and later attended Beulah Baptist where he was a member of the Men’s Sunday School Class and a former Deacon. He was one of the original Gates County Jaycees and was a longtime volunteer with the Rescue Squad.

“Frank was so proud of his home county, including the agricultural crops grown here and the one stoplight claim to fame. He was a great promoter of Gates County,” Mrs. Rountree stated.

Despite the easing of many statewide health safety mandates, local health officials are urging citizens to remain vigilant in the... read more