Fast track to the top

AHOSKIE – A mere three years after it was first organized, the Ahoskie Christian School baseball program stands at the top of the mountain. 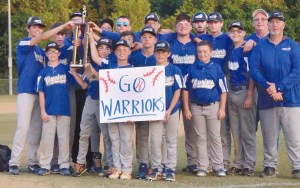 “I’m very proud of the guys and what they were able to accomplish this year,” said ACS head coach Chuck Munford.

The feeling of accomplishment found from winning a league championship was just a dream three years ago.

“We started out with an extremely young team back then, having to play a lot of seventh and eighth graders; some of them didn’t have any baseball experience at all,” said Munford.

The coach said the first season in 2019 was limited to just a handful of games.

“We played about six games that season,” Munford recalled. “We were looking forward on building our program in 2020. We played one game and then COVID-19 hit and the rest of the season was canceled.”

Now, one year later with restrictions loosening a bit from the medical pandemic, Ahoskie Christian managed to play 14 games.

“This team showed a lot of grit and determination from the start; they came a long way from that young group from 2019 to now,” Munford remarked. “Our regular season was a building block; we showed a lot of improvement game by game and were playing our best ball at the end.”

The week prior to state finals, Ahoskie Christian met New Life Christian of Elizabeth City in a game played on a neutral field in Edenton. That one game determined the top two seeds from the NCCAA’s Northern District.

“That gave us a lot of momentum going into the overall conference tournament last weekend in New Bern,” Munford said.

In Friday’s NCCAA tournament opener, Cody Hurdle pitched a complete-game shutout as Ahoskie Christian blanked Gramercy Christian, 10-0, in five innings. Hurdle and Kellan Whitby each had two hits to lead the Warriors offensively. Conner Munford and Brayden Baggett each added a triple while Trent Hoggard chipped in a single.

In Saturday’s championship game vs. BACA, Ahoskie Christian built a commanding lead early and then held on to claim the title.

Hurdle pitched the first three innings for the win. Hunter Pearce and Hoggard also pitched in that game for the Warriors.

Whitby added a double and a single; Donavan Bowser had two singles, C.J. Martin chipped in a double, and Hurdle, Pearce, Colin Daughtrey, and Jessie Winn each had a single.

Several Ahoskie Christian players were individually honored during the awards ceremony after the game. Hurdle was named as the Tournament MVP, and joined his teammate Conner Munford on the All-Tournament Team. Whitby and Hurdle were selected All-Conference.

“It was a very special season for us,” coach Munford said. “We had a lot of support along the way. I want to thank all the parents that helped get the kids and the gear to the games. I thank the coaches – Earl Hurdle, Trent Munford, and Jose Ortiz – that kept me pointed in the right direction. Thank-you to Joey Parker for keeping our home field ready to play on and thanks to the staff at Ahoskie Christian for their support and giving me the opportunity to coach these fine young men. And I also need to thank my bat boy, C.J. Munford.”

In addition to the ACS players mentioned earlier in the story, other members of the 2021 NCCAA champions are Cole Bradley, Brayden Harper, Grant Smith, Tyler Martin, Brenden Pearce, and Tanner Matthews.