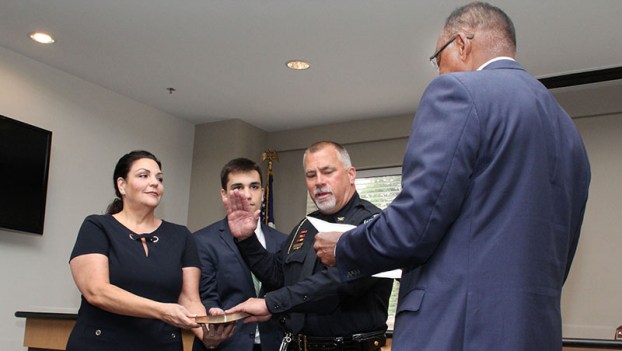 With his wife, Valerie, and son, Ethan, holding the Bible, Jimmy Asbell accepts the oath of office as the Town of Ahoskie’s Chief of Police from the Honorable Superior Court Judge Cy A. Grant during a ceremony held Monday morning. Staff Photo by Cal Bryant

AHOSKIE – The Town of Ahoskie formally welcomed its new Chief of Police here Monday morning during a swearing in ceremony for Jimmy Asbell.

Asbell, a veteran of 28 years in law enforcement, served 17 of those years holding the rank of Major with the Ahoskie Police Department (APD), working alongside Chief Troy Fitzhugh who officially retired on Friday of last week.

The new chief accepted his oath of office in front of a masked crowd gathered inside the Ahoskie Town Council’s meeting room at the fire department. 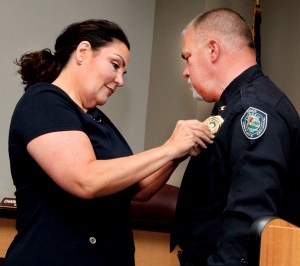 “First of all I would like to thank my Lord and Savior, Jesus Christ, for making this day possible,” Asbell said as he opened his remarks after being sworn in and pinned with the police chief’s badge. “I thank my family for always being there and supporting me. I thank the town manager, town council and the mayor for this great honor.”

Asbell added that he has spent the last 28 years of his life serving, protecting, and giving back to the community in which he lives.

“I’ve been blessed with the opportunity to work with many talented people during that period of time,” he observed. “They have been my mentors and have contributed so much to my success.”

Asbell signaled some of those that have played instrumental roles in shaping his career as a law enforcement officer: Steve Hoggard, Mike Williams, Wesley Liverman, Raymond Eure, Dwight Ransome, Ed Webb, and Fitzhugh.

“These individuals reinforced things I learned at an early age that planning, being honest, trustworthy, fair, and treating people with dignity and respect are all healthy habits of a being a successful law enforcement officer,” Asbell remarked. “Today, more than ever, those fundamentals are so crucial for a law enforcement officer to adhere to.

“In moving forward in this new position I will continue to work alongside the men and women of the Ahoskie Police Department,” Asbell said. “These talented and professional individuals work hard each and every day for this community. They have dedicated their lives to public service and in today’s climate with all the trouble that surrounds us I commend them for their dedication and for their service. I’m proud to be a part of that team.”

Asbell noted that policing in today’s world is much more than investigating crimes and arresting those who break the laws.

“It’s also about providing counseling to families in distress; it’s about giving someone suffering from mental illness the help they need; it’s settling civil disputes between neighbors; working with the youth and so much more,” he stressed. “We require officers to not only be experts in law enforcement, but also to have the same skills as a teacher, a trained psychologist, a lawyer, a community organizer, and the list goes on.”

Asbell promised to continue to build upon the solid foundation on which the Ahoskie Police Department is built.

“That is to provide high caliber level officers who are capable of providing the services that this town and community deserves,” he stated. “We’re going to focus our efforts on more community involvement, crime prevention and education, partnerships with community agencies, the clergy, and other organizations to help at-risk youth; to battle crime; and make this community a safer place to live and raise your children.”

“We’re both quiet; we go about our business in a respectful manner; we’re very thorough in our work; and we can talk to people no matter who it is,” Hayes noted. “I’ve crossed paths with Jimmy while we worked criminal cases. I watched how he works, how he operates….he’s a very serious man, but he still has a sense of humor.”

Hayes defined Asbell as a leader.

“He can command a presence and ask the tough questions,” Hayes stressed. “Jimmy is a man of honor and a man of leadership.

“I call him my friend because we both have the same vision, that of making Hertford County and Ahoskie safer,” Hayes added. “I know I can count on Jimmy and the Ahoskie Police when my officers need them much in the same way he can count on my department when the town needs assistance.”

Chief Asbell’s wife, Valerie – the local District Attorney – stated how proud she is of her spouse.

“I’ve looked forward to this day; I’m so thankful to the town manager, the town council, and the mayor because they chose my husband, who is a man of God, to be the police chief,” she said.

“This is a momentous occasion as it has been over 17 years since the Town of Ahoskie had to name a new police chief; that’s the longest of any other town in the state right now,” McDuffie said. “On behalf of the mayor and members of our town council, congratulations to our new police chief and thank you for your years of service and protection to our town.”

Rev. Roger Kiker of Center Grove Baptist Church where Chief Asbell serves as a Deacon and a member of the Trustee Board, gave the opening prayer and the benediction.

Asbell started his career as a law enforcement officer in 1991 at the APD after graduating from Chowan College with an associate degree in Business Administration and after successfully completing the Basic Law Enforcement Training Academy.

He left Ahoskie for a short stint (1993-94) as a Patrol Officer at the East Carolina University Police Department before returning to the APD in 1994.

In 1999, Commander Wesley Liverman of the Roanoke Chowan Narcotics Task Force hired Asbell as a Narcotics Agent. That Task Force covered Bertie, Hertford, Gates, Martin, and Washington counties. Asbell worked his way up through the ranks to become a Senior Narcotics Agent, eventually becoming the Assistant Commander of the Task Force.

In 2004, Fitzhugh convinced Asbell to return to the APD to serve as Major (second in command at the department).

During his years as a law enforcement officer, Asbell has received many hours of law enforcement education either through in-service training or specialized schools. He received his Advanced Law Enforcement Training Certificate in 2004 from the North Carolina Sheriff’s Education and Training Standards Commission.

As the APD Major, Asbell understood the need for a current collaborative effort between law enforcement agencies to combat the increasing number of narcotics, gang related crimes, and violent crimes associated with narcotics trafficking in Ahoskie and the surrounding counties. His extensive background in narcotics and violent crime investigations and his management experience allowed him to spearhead and help establish the Down East Drug Task Force consisting of investigators from Bertie, Hertford, and Northampton County Sheriff’s Offices and the APD. After the Down East Drug Task Force was formed in 2016, Asbell was asked to serve as its Commander by Chief Troy Fitzhugh, Sheriff John Holley, Sheriff Dexter Hayes, and Sheriff Jack Smith.

Since its inception, the Down East Drug Task Force has worked with the federal and state authorities and the United States Attorney’s Office under the “Take Back North Carolina Initiative” to arrest and prosecute local drug traffickers and try them in federal court where the offenders have received significant active time for their narcotics trafficking and the violent crimes associated with it.

During the 2018 Annual Federal OCEDTF Narcotics Conference, Asbell received a Certificate of Appreciation and Special Recognition from United States Attorney Robert Higdon for his leadership and commitment to the Take Back North Carolina Initiative throughout this District.

Asbell is the father of two sons, Cole and Ethan.

Hail to the Chief!

AHOSKIE – Troy Fitzhugh always knew this day would come. What he failed to realize is just how fast it... read more