JACKSON – After a closed session meeting here April 29, the Northampton Board of Commissioners voted to accept the resignation of County Manager Charles Jackson.

Commissioner Kelvin Edwards provided the motion to accept, and Commissioners Geneva Faulkner seconded. The vote was 3-1 in favor, with Commissioner Joyce Buffaloe providing the dissenting vote. 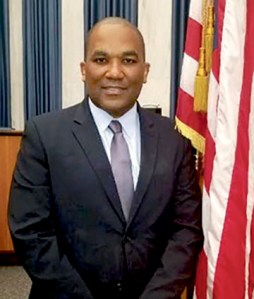 Commissioner Nicole Boone was not present for the meeting.

Jackson submitted his resignation a day prior to the commissioners’ meeting, just a few months shy of marking his second anniversary with the county.

In addition to accepting the resignation at Thursday’s meeting, the commissioners also appointed Board Chair Charles Tyner to serve as the interim county manager. Tyner will temporarily fill the vacant position in accordance with NC General Statute 153A-84.

The statute states that “whenever the position of county manager is vacant, the board of commissioners shall designate a qualified person to exercise the powers and perform the duties of manager until the vacancy is filled. The board may designate the chairman or some other member as interim manager.”

Though a salary increase is allowed under the statute, Tyner will not receive any additional compensation during his time as interim county manager.

This will not be the first time Tyner has stepped into the interim position. He served very briefly in the same position after former manager Kimberly Turner’s resignation in Feb. 2019. After two days, the Board then selected Robert Murphy, a retired county manager with over 30 years of experience, to serve as the interim while they continued to search for a new full-time county manager.

Tyner told the News Herald on Friday they plan to do the same thing this time as well. He will fill the position until they select another person to serve as interim county manager.

“And I hope to find one within the next week,” he said.

After that, the Board will focus on their search for a new manager to replace Jackson.

A native of Whiteville, NC, Jackson stepped into the role after a unanimous vote by the Board of Commissioners in June 2019. They had interviewed over 30 candidates for the job prior to selecting Jackson.

Before coming to Northampton County, Jackson’s previous government experience included working with the State of North Carolina, the City of Raleigh, and the Richmond City Council, where he was a fiscal and policy advisor. He is a graduate of UNC-Charlotte with a degree in Public Administration.