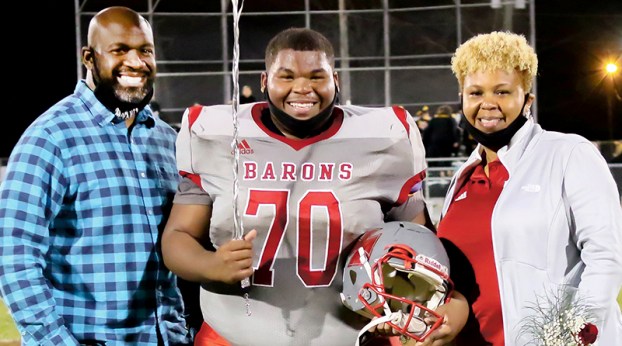 Micah Brooks is shown with his parents, Lee Mo Brooks and Krystal Brooks, on Senior Night this year at Gates County High School. The GCHS senior was injured earlier this month in an ATV accident. Several fundraisers are planned to help Micah’s parents cover his medical needs. Photo by Charles Revelle

GATESVILLE – Over the course of his young life, Micah Brooks has learned that a positive attitude and bushel baskets full of kindness will allow an individual to build an army of friends.

Now it’s those friends who are returning the many acts of kindness that Micah has given over the years.

Several fundraisers are in the works to assist Micah and his family in their time of need. The Gates County High School senior suffered a spinal cord injury in an ATV accident on April 6.

“With God’s grace, his family, and his medical staff, Micah has made strides since the accident, but requires more treatment and rehabilitation,” said Cindy Smith Barber, the organizer of a Go Fund Me page online. “This is where we get to be great! Micah is in need of treatment in Atlanta, Georgia at the Shepherd Center. He wants to fight like the football player he is and we need to get him there and assist his family with being there for him.”

Barber said all proceeds generated through the online fundraiser will go directly to an account managed by Micah’s parents.

“We know that God is a healer and he orchestrates relationships not by chance and when Micah was placed in our presence it was already a plan set it motion,” she stressed.

Those wishing to donate are encouraged to visit www. gofundme.com (Be Micah’s light like he has been ours!).

“Remember that no amount is too small or big. Just know that helping this young man is one of the best things you could ever do, because he is by far one of the best young men in this world. Gates County loves Micah Brooks. #MicahStrong,” Barber stated.

Barber noted that Micah has strong ties to the local community through volunteering or simply offering help in the form of a big hug, kind word, or his electric smile. There are plenty of others in Gates County who feel the void of not having the daily interaction with Brooks.

“Micah is such a loving and kind-hearted individual,” stated Gates County High School Principal Jonathan Hayes. “Many days while we were out of school, Micah would come in the building, speaking to staff with that uplifting spirit and spreading cheer wherever he went. And he is sincere and genuinely interested when he asks how you are doing.

“Some days after school, he would spend time with staff members’ young children, being a great role model while also becoming a great hero. Micah’s infectious, positive attitude towards others and life make those around him better people,” Hayes added.

Fellow GCHS senior Jordan Mitchell said she and Micah have been friends for a long time.

“Micah is such a kind-hearted, sincere individual,” she remarked. “We have been in classes together since the second grade, and he has never failed to make me laugh or smile. I feel that it is very important that we rally around him, as he would do in a heartbeat for any of us.”

GCHS sophomore Brendan Casper called Brooks, “the most positive person in the world.”

“He tries to find the good in everything,” Casper continued. “Even though we had a tough basketball season, Mich kept inspiring everyone to work harder and not give up. I know he will remain positive throughout this time.”

“Micah has been had been a dedicated member of the Red Barons football team for the past four years,” said GCHS head football coach Matt Biggy. “He brings a constant positive energy, and had been a great young man to work with during his high school career. We know he has a long road to recovery, and we want to mirror his positive attitude into anything we can do to help him in this process.”

In addition to the online effort to raise money to assist the Brooks family, there are two other fundraisers upcoming.

Whole Boston Butts (which average nine pounds pre-cooked weight) will be cooked and sold on Wednesday, May 5. Pick-up will be from 4-6 p.m. at Gates County Farm Service, located adjacent to Duck Thru on NC 37 in Gatesville.

The price is $35 each and must be ordered in advance by calling Gates County Cooperative Extension at 252-357-1400. Those paying by personal check need to make them out to Micah Brooks.

The GCHS Fellowship of Christian Athletes is hosting an event on May 24 featuring Captain Bob’s fried chicken, sliced potatoes, green beans and hush puppies for $10 per plate. Those plates can be picked up (drive-thru style0 from 11 a.m. until 2 p.m. and again from 4-7 p.m. at Gates County High School.

All proceeds from both events will go directly to Micah’s medical expenses. Donations are welcomed.

JACKSON – Northampton County Schools are planning to expand career opportunities for their students and help provide them with credentials... read more