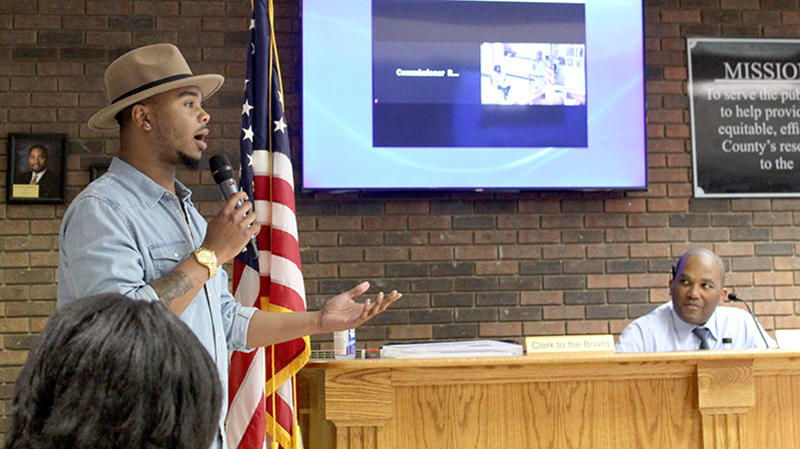 Conway native Deion Warren shares his experience thus far on “The Voice” during Monday’s meeting of the Northampton County Board of Commissioners. Staff Photo by Holly Taylor

JACKSON – The Northampton County Board of Commissioners had a visitor at their regular meeting here on April 5. Deion Warren, a contestant on NBC’s “The Voice” and a Conway native, stopped by to talk about his plans for the future.

“He came by my office a couple days ago and we had a quick chat about his journey to where he’s at now,” said County Manager Charles Jackson about why he invited Warren to speak at Monday’s meeting.

Jackson said he wanted more people to hear Warren’s story, especially younger people who can look to the aspiring local singer as a role model.

Warren said the process of competing on “The Voice” television show began with a virtual audition last summer, but his personal journey has been ongoing a lot longer than that and it’s hasn’t always been easy.

“I experienced a host of different things over the course of my lifetime,” he explained, noting that depression was one obstacle he had to deal with.

“Music is therapeutic for me, and that’s my outlet. That’s how I overcome different things,” he continued.

Warren said he’d like to make a positive impact and be a role model to the community, hopefully to inspire more local people to pursue their own dreams.

“There are so many talented people in the ‘252’, and we never get that opportunity to be seen and be heard,” he said. “God allowed me to be that example, allowed me to be on that platform, just to share my gift with the world.”

A person’s mindset, he said, is what helps people achieve their goals.

He concluded his presentation by thanking the commissioners for the opportunity to speak at the meeting.

County Manager Jackson said he hoped Warren would be able to partner with Northampton County Schools in the future in order to continue sharing his story.

“I think you’ll be an inspiration to our students and our schools,” remarked Board Chair Charles Tyner.

Warren is the son of Bobby and Alice Warren of Conway. He is a 2011 graduate of Northampton County High School, and has also earned a Bachelor’s degree in criminal justice from Elizabeth City State University. He’s currently employed as a probation officer in Emporia, VA.

His first appearance on The Voice aired on March 9 where he was chosen by singer/songwriter John Legend to compete on his team. Warren said his next appearance on the show should be airing soon.

The Voice is a singing competition television show where competitors are mentored by famous singers along the way. The show is currently in its 20th season.

Rapid charging station for EVs to be unveiled April…