LASKER – Thirty-eight runs off 22 hits offensively backed up by strong pitching will typically allow a baseball team to win games.

Such was the case for Ridgecroft School here earlier this week as the Rams combined those two elements of the game to capture the championship trophy of the 10th annual Sgt. Will McLawhorn Memorial Baseball Scholarship Tournament held April 5-6 at Northeast Academy.

Players and coaches of the Ridgecroft School baseball team pose with Rev. Willie McLawhorn (left) after he presented the squad with the championship trophy of the 10th annual Sgt. Will McLawhorn Memorial Baseball Scholarship Tournament. The four-team event was held April 5-6 at Northeast Academy. Contributed Photo

The tournament is played annually around Easter break in honor of the late Sgt. Will McLawhorn, a Northeast Academy graduate who was killed in action while serving in the U.S. Army stationed in Afghanistan. McLawhorn played baseball and basketball at Northeast, graduating in 2005.

The Rams, who had lost only once this season coming into this annual event, showed why they are having a banner season thus far.

In Tuesday’s championship game, Ridgecroft built a quick 11-0 lead over the first two innings and then scored nearly that many (9) in the bottom of the third en route to a 23-4 win over Ahoskie Christian School.

Caleb Porter took the win on the mound, working three innings where he didn’t surrender a hit while fanning one batter. Cody Peterson threw two innings in relief out of the bullpen. He didn’t allow a hit and fanned five. 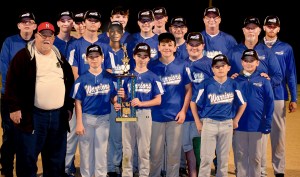 The Rams (now 7-1 overall) broke the game open in the bottom of the third. There, Lane Slachta, Treyce Myers, Colby Hauser, Peterson, and Dunn all sent runners across the plate with RBIs in the inning.

Peterson and Slachta finished with two hits each while combining to drive home seven runs.

Ridgecroft ran wild on the base paths with 14 stolen bases. Myers led that effort with three steals.

Despite being held without a hit, Ahoskie Christian found other ways to generate some offense as the Warriors tallied their four runs off a combination of nine walks, two wild pitches, one hit batter and a pair of Ridgecroft fielding errors.

Boone Barkley led the Rams on the pitcher’s mound. The righthander went five innings, allowing one unearned run on three hits while striking out 10 and walking one.

Joshua Morris was on the pitcher’s mound for Bethel Assembly Christian Academy. The hurler went two innings, allowing seven runs on five hits and striking out two. John Todd and Parker Cale entered the game from the bullpen, throwing one and two-thirds innings and one-third of an inning respectively. 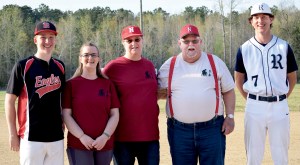 Joshua Morris (left) of Bethel Assembly Christian Academy and Lane Slachta (right) of Ridgecroft School were the recipients of a $1,000 scholarship at the Sgt. Will McLawhorn Memorial Baseball Scholarship Tournament. Contributed Photo

Ridgecroft launched two home runs on the day. Barkley had a homer in the second inning. Porter went deep in the fourth inning.

A trio of Ridgecroft players stole at least two bases. Porter led the way with three.

Prior to the start of Tuesday’s championship game, Rev. Willie McLawhorn, in memory of his late son, presented $1,000 college scholarships to Joshua Morris of Bethel Assembly and Lane Slachta of Ridgecroft School.

“Due to the generosity of our sponsors – TD Sports, Watson Builders, Hampton Farms, and Northampton County Farm Bureau – and the support of Northeast Academy and the fans who bought t-shirts and showed up, we were able to give a $1,000 award to each of these young men,” said Rev. McLawhorn. “Also a special shout-out to Mary Rowe for manning the t-shirt table, to those who worked the concessions, and to Johnny and Joella Brown for their support and direction.

“This year’s tournament was inspiring to our family and a great overall success. Thank you to all who help us help others in Will’s memory,” he concluded.

Earlier this week, a member of a relatively popular Japanese boy band announced he was leaving his group. He will... read more