RALEIGH – Jeanne Riddle Parker, 90, passed away on April 7, 2021. Born March 25, 1931 in Spruce Pine, NC to William Palmer and Ruth Florence Riddle, she was the youngest of nine children. She was preceded in death by her husband, Dr. Alton Parker; siblings, Zula, Zora, Frank, Joe, Charles, Zella, and Fred. She is survived by one brother, Leo; her children, Alton Parker Jr. (Ken Greenlee), Mark Elton Parker (Janet Parker) and many nieces and nephews. 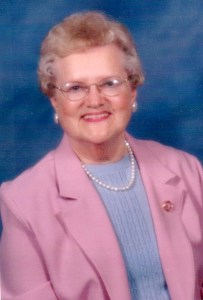 Jeanne graduated from Berea College in 1953 and obtained her Masters in English from Appalachian State University in 1958. She taught in high schools, then moved to Murfreesboro, NC where she taught English at Chowan College. In 1962, she married Dr. Alton Parker, the local optometrist.

Jeanne’s hobbies were music and creative writing. She sang in church choirs most of her life. She played the piano by ear, and often played for senior citizens groups. She taught kindergarten music at Murfreesboro Baptist Church, served as a Deacon, on the building committee, on the Board of Trustees, taught Sunday School and Bible School, and directed the church’s first handbell choir. Late in life she played the country fiddle and joined with friends in a trio called “Wildwood”. She was an active volunteer for the Murfreesboro Historical Association.

A graveside service will be held at Riverside Cemetery in Murfreesboro on Sunday, April 11, 2021 at 2 p.m. In lieu of flowers, memorial donations may be sent to Berea College in Berea, KY, The Murfreesboro Historical Association, Murfreesboro Baptist Church, Chowan University, or Transitions Lifecare Hospice in Raleigh. The family is thankful for the amazing staff at Elmcroft of Northridge in Raleigh who took such good care of Jeanne over the last 14 years.