GASTON – An early evening fire here Monday is listed as suspicious in nature. 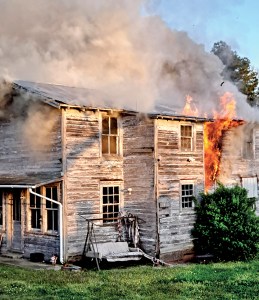 Gaston Fire-Rescue-EMS and the Garysburg Fire Department were dispatched at 7:04 pm on Monday. Upon arrival, a wood frame two-story home was found with heavy gray smoke and flames escaping the side of the structure, according to Gaston Chief Ed Porter Jr.

Porter said firefighters pulled handlines and contained the fire within 10 minutes of arrival.

Over 30 firefighters were on the scene during the incident.

No one was found inside of the structure.

Firefighters remained on scene for nearly an hour and a half conducting fire suppression and overhaul operations.