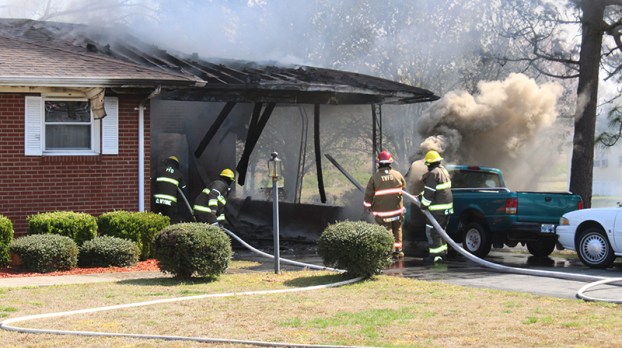 Members of the Powellsville and Trap Volunteer Fire Departments battled a blaze on Easter Sunday morning at a Powellsville residence on NC 42. No one was injured. Photo by Gene Motley

POWELLSVILLE – A residential fire here on Easter Sunday morning caused major damage to the home of a 103-year-old woman.

The fire was at the home of Estella Simons, who resides at 201 NC 42 East. She was attending church at the time of the blaze.

According to Ralph Brinkley of the Powellsville Volunteer Fire Department, the blaze was reported at 10:40 am. He said heavy smoke was showing as the first of four Powellsville VFD units arrived at the scene just a few minutes later.

“The fire started in a utility room located off a carport that’s attached to the home,” Brinkley said. “We believe there was a malfunction in the electrical panel box that caused the fire.”

Brinkley said the fire got into the attic area of the home. The blaze completely gutted the carport and utility room and although the remainder of the home appears intact, he said there was major damage to the interior.

“The main part of the home suffered smoke and water damage, some ceilings fell in due to the weight of the water we were using to put out the fire in the attic,” Brinkley said. “The house is unlivable.”

Members of the Trap Volunteer Fire Department assisted the Powellsville firefighters. All total, Brinkley said there were 25 firefighters and six units on the scene.

He said the last Powellsville unit cleared the scene at around 1 p.m.

The impact of the COVID-19 vaccine becoming more readily available is being felt locally across the Roanoke-Chowan area. There were... read more