The tournament is played annually around Easter break in honor of the late Sgt. Will McLawhorn, a Northeast Academy graduate who was killed in action while serving in the U.S. Army stationed in Afghanistan. McLawhorn played baseball and basketball at Northeast, graduating in 2005. 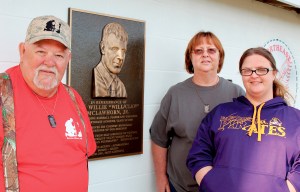 Members of the McLawhorn family (from left) Rev. Willie McLawhorn, Sr., wife, Diane, and daughter Melanie, pose beside a bronze plaque dedicated to their late son and brother, Sgt. Will ‘Claw’ McLawhorn, who was killed in action while serving in Afghanistan in 2010. File Photo

Admission is $5 per person.

Opening day, Monday at 4 p.m., a brief pre-game ceremony will be held. The first game pits Northeast vs. Ahoskie Christian followed by Bethel Christian vs. Ridgecroft.

Tuesday at 4 p.m., Monday’s losers will face off in the consolation game with Monday’s winners playing in the nightcap for the tournament championship.

Concessions will be sold.

McLawhorn, a native of Columbus County, moved with his family to Conway in 1998. There, his love of basketball and baseball continued, playing both sports on the junior varsity and varsity level. He was selected to the All-Roanoke-Chowan Baseball Team his senior year.

In 2006, McLawhorn enlisted in the U.S. Army. Upon graduation from basic training, he was assigned to the 101st Airborne Division where he became a part of the Screaming Eagle family.

Prior to deployment to Iraq in 2007, he graduated from Air Assault School, earning his Air Assault Wings. He served 15 months in Iraq and reenlisted for five years while there. During the next months he earned his Airborne Jump Wings as well as additional training for becoming an NCO. In June of 2010 he deployed with his unit to Afghanistan. He grew to love his country and wanted to protect her…even if it meant giving his life. He loved his band of brothers who affectionately called him “Claw.”