AHOSKIE – The man at the helm of N.C. Highway Patrol Troop A, District 2 is both prepared and ready.

First Sgt. L.M. Hill took the reins of the N.C. Highway Patrol leading District 2 just a few weeks ago, but his preparation for serving the citizens of Bertie, Hertford and Gates counties began more than two decades ago. 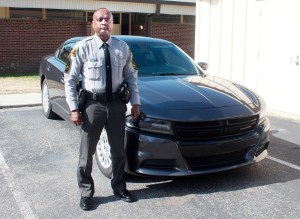 A native of Jones County, First Sgt. Hill signed up for the Highway Patrol Academy at 22 years of age, and has spent the next 22 years in northeastern North Carolina.

His first assignment was in Chowan County where he spent 15 years working as a patrolman. Sgt. Hill said it was a good place to begin his career.

“It was a great place to start,” he said. “It was slow enough to learn what you need to know. They took very good care of me in Chowan County – and they still do.”

After spending 15 years on the roads keeping Chowan County safe, he decided to begin the process to earn promotion. While some may have been seeking personal glory, it was something different for the future First Sgt.

“For me, it was mainly for my fellow troopers,” he said. “I had 100-plus sergeants in my 15 years, and some of them made it clear they didn’t want to be there.

“I wanted to be able to support my fellow troopers and take care of them,” First Sgt. Hill said.

After entering the promotion protocol, he was successful and soon earned the rank of sergeant – where he was promoted to serve in New Bern. He stayed there for a year before returning closer to the region in Washington County.

During his time as a sergeant, Hill said he spent about 75 percent of his time on administrative duties, but still was able to work the road and be engaged with the troopers under his supervision.

“As a sergeant, you need to be engaged with the troopers and the only way to do that is to be involved with them,” he added.

Following his years as a sergeant, Hill earned his latest promotion to serve as First Sergeant in Troop A, District 2. He said his goals are simple: keep the roadways safe, keep an open line of communication and a good relationship with the allied agencies in the community.

Perhaps the biggest obstacle in the way of the new First Sergeant is manpower. Currently District 2 has just seven of the 14 allotted troopers.

“My goal is to push to get more troopers here to assist with calls and better serve the community in A 2,” he said. “We are short staffed with only seven troopers for three counties.”

The district is also under almost entirely new leadership with Sgt. S. Richardson the longest-serving of those in administrative ranks – and he arrived last November. The other sergeant – Kevin Heath – arrived with First Sgt. Hill last month.

The troopers in A 2 have been a bright spot for their new leaders.

“The troopers are very knowledgeable about doing what’s expected of them and doing it to the best of their abilities,” he said. “Obviously seven people can’t do the job of 14, but they are doing a great job in a tough situation.”

“We’ve all been out making the rounds and meeting people,” the First Sgt. said.

For his own part, he has already met with emergency management leaders in two of the three counties, and intends to meet with the others in the coming week or so.

First Sgt. Hill is familiar with Bertie and Gates counties in particular, having filled in as a trooper in Bertie County in 2003-2004 and already having worked with troopers in Gates County.

“I do have experience with those two counties, but Hertford County is completely new to me,” he said. “So far everyone in all three counties have been welcoming.”

Part of his familiarity with Bertie County is his knowledge of a traffic situation that has been a big concern for the northwest portion of Bertie County – and particularly mayors in Roxobel and Kelford – and that is traffic at shift change at Perdue.

“I am familiar with the issue with traffic there, and we’re already dealing with it as best we can,” First Sgt. Hill said.

He also added he has plans to address the issue thoroughly with troopers working Bertie County to hear their input and thoughts, as well as to reach out to Perdue to see if there is a possibility of speaking with employees about traffic safety.

First Sgt. Hill said one life has already been lost in a fatal collision due to speed in that area, and promised it “has my full attention.”

Like most people, the new First Sgt. has those who he feels have been mentors to him over his time with the NCHP and helped him prepare for his new responsibilities. He particularly credited Sgts. Gary Brown, Kevin Respess, Kevin Rock and Chuck Gould for the role they played in helping him with the N.C. Highway Patrol.

First Sgt. Hill said he has six years left to retirement and he could happily spend them all in Troop A, District 2.

“My plans right now are to retire here or be promoted from here,” he said. “I love the area.”

First Sgt. Hill married his high school sweetheart, LaKeisha Hill, 20 years ago and the couple has two daughters – ages 18 and 10.

Thadd White is the Editor of the Bertie Ledger-Advance. He can be reached via email at twhite@ncweeklies.com. Permission was received to publish this story and photograph.