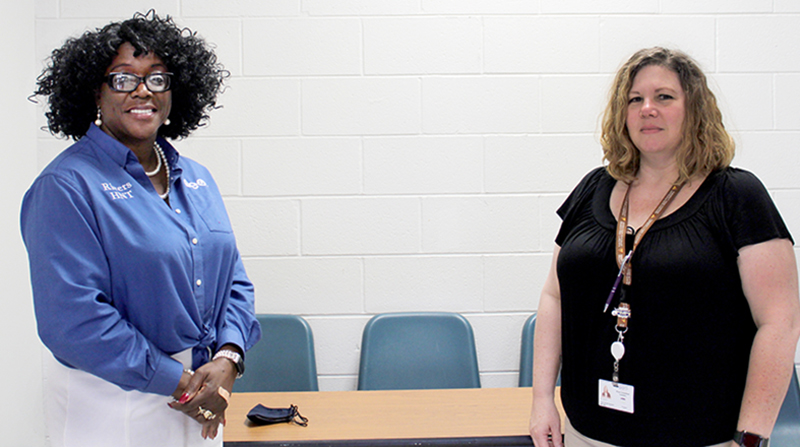 Executive Secretary Deborah Gatling (left) poses for a photo with coworker Kristen Fajardo on their last day of work at Rivers Correctional Institute on March 31. Gatling, who worked at RCI for 20 years, said she was blessed to have worked at the facility. Staff Photo by Holly Taylor

WINTON – The atmosphere was a bit like the last day of school before summer break. People were packing up their things, cleaning out the trash, and promising to keep in touch.

But unlike school teachers and students leaving for a temporary break, the employees here at Rivers Correctional Institute (RCI) are still unsure whether or not they’ll have an opportunity to return to their jobs at a later date.

Wednesday, March 31 was officially the last day on the job for almost 400 employees at the 20-year-old facility. 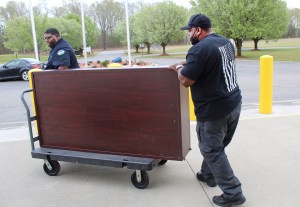 Darren Smallwood (right) helps Raymond Carey Jr. remove items that are no longer needed from the building. Both men worked in the transportation department of RCI. Staff Photo by Holly Taylor

As previously reported by the News Herald, the private prison located near Winton is shutting down after the Federal Bureau of Prisons (BOP) announced in November 2020 that they would not renew the contract with the GEO Group, which operated the facility. Representatives from the BOP at the time said the number of inmates had been on the decline, including at RCI, and the bed space would not be needed.

In February, the Hertford County Commissioners unveiled a plan that would keep RCI operating. That plan would involve an agreement with the US Marshals Service (USMS) to house detainees who are awaiting trial, awaiting transportation to facilities to serve their sentences, or awaiting a hearing on their immigration status or deportation.

USMS said in a statement that they often enter into partnerships with state and local governments for the use of private facilities in order to make it easier to house detainees within the prosecuting judicial district.

Hertford County intended to subcontract with the GEO Group in order to make beds available at RCI for these short-term federal detainees under the jurisdiction of USMS.

But then an Executive Order from President Joe Biden put a halt to those plans. That order aimed to eliminate the use of private detention facilities for any federal detainees, including those from USMS.

Members of the National Federation of Federal Employees (NFFE) have lobbied for reconsideration, but without any changes to the Executive Order currently forthcoming, employees said their goodbyes on Wednesday, the last day of GEO Group’s contract with the BOP.

“People are sad. Their families have grown up with them being employed here,” said Kristen Fajardo, an RCI employee who also serves as the president of the local lodge CE-4 of NFFE.

She also noted 37 employees were celebrating their 20th year at RCI this year.

Fajardo, who was with RCI for 11 years, worked with programs to reduce the recidivism rate among inmates.

“We had good regulations and very few incidences here. We enjoyed most days,” she said. “I felt like I was making a difference.”

The sudden loss of so many jobs, she added, will not only affect the employees themselves but also the surrounding community. She pointed out that she often filled her car with gas at the Duck-Thru in Winton. Many employees eat lunch at the Winton Café or shop at the Family Dollar.

“I feel for all the employees that are taking a loss,” he continued.

That employee said his concerns now are about providing for his family. His wife is pregnant and they also have a young child with health issues.

“This is a huge impact to our family because Rivers has been the supporting factor behind our medical bills,” he said. “And now we’re struggling because I’m losing my health insurance.”

He said he has already applied to several other jobs and is now just waiting to see what will happen next, but he can’t wait too long to see if RCI will reopen.

“I’m being optimistic, but at the same time I have to be realistic,” he emphasized.

Darren Mitchell, an employee who has been a Building Construction Technology Instructor for nine years as well as vice president of the NFFE local lodge CE-4, said he didn’t think the job loss would sink in until the next day when he doesn’t have to drive to work.

“I have enjoyed the whole nine years. It’s been a very nice place to work, and it’s going to be hard to come off this [parking] lot today,” he said.

As an instructor, Mitchell helped inmates learn skills that will help them get their lives back on track and keep them from returning to prison.

“It’s a shame to lose the rehabilitative programs. We were helping them restart their lives,” he said, recalling several times when former inmates had called back to thank him and other instructors.

“My experience working here has given me a whole new outlook on detainees. I’m thankful for that,” he continued.

Mitchell said that he enjoys teaching construction and he plans to keep doing that, no matter what happens next.

Transportation Supervisor Darren Smallwood said he wished the politicians involved would come visit the facility and see firsthand how the employees are being affected by the loss.

“I’ve been here a total of 16 years. This has provided so much for my family,” he said. “This is devastating.”

Smallwood said he and other employees would adapt, but that change will take time, “and in between that time, the bills are still due and you’re still trying to be a productive citizen.”

“It hurts. It’s like a bad dream. But we will pick up the pieces and we shall continue,” he concluded with determination.

Vanessa Cherry worked five years as a Continuum of Care Substance Abuse Counselor, trying to help inmates with those issues.

She said her last day of work at RCI was “like nothing I’ve ever felt before,” struggling to find the words to explain the feeling.

“I still have a mother to take care of and I’m going to do that. We’re going to be okay, but it’s going to be tough. These next few weeks are going to be really tough,” Cherry continued.

“I met some amazing people on this adventure. It’s been a journey,” she also added.

Fajardo and NFFE National Business Representative Roosevelt Littlejohn Jr. said they were still working on a way to reopen RCI.

“We recognize that it would only take President Biden accepting a small change on the interpretation for his Executive Order to allow the marshals to come in,” Fajardo explained.

“We’re looking at some legal actions. We haven’t given up yet,” Littlejohn said.

Meanwhile, the Hertford County Board of Commissioners directly contacted North Carolina and United States Representatives to explain the significance of the personal and community loss with the closing of RCI.

“Despite the monumental efforts of the Hertford County Board of Commissioners, our state and federal legislators, community stakeholders and the GEO Group, a viable solution has yet to be identified but the work continues for the benefit of the staff at Rivers Correctional Facility and the community. The County of Hertford stands ready as an active and engaged partner to find a solution,” county official said in a statement.

U.S. Senator Thom Tillis sent a letter addressed to US Attorney General Merrick Garland on March 22, stating he was adamantly opposed to letting the RCI facility close, citing the negative impact of public safety and the economy of the area.

U.S. Congressman G.K. Butterfield, who represents most all of northeastern North Carolina, said he has been in frequent contact with individuals who will be affected by the closure of Rivers Correctional Institute.

“Congressman Butterfield has discussed this matter with senior White House officials and is seeking a definitive interpretation. He has expressed concern about the 300 individuals who work for this facility,” stated Nicole Julius-Phillips, Communications Director & Policy Advisor for Rep. Butterfield.

Even though the fight to keep RCI open continues, employees spent the last day of work cleaning out their desks and carting their belongings to their cars while reminiscing over their time together. There were plenty of watery eyes and resigned smiles as the future currently remains uncertain.